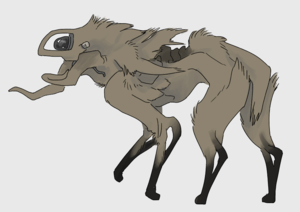 Talyxian Dogs (タリクシアンの犬) also called "T-Dogs", commonly known as Tal's "dogs" among Eltus folks, are a species which belongs to the Talyxian organism group. In Talyxian organism biology, they are classified under Talyxian-Associator. They live in urban and civilized areas in the southern lands of Tal such as Gold Ring, and known as a domesticated creature well.

They have a similar appearance to the Talyxian-Wolves, but the corroborated biological relationship between T-dog and T-wolves has not been elucidated.

Every Talyxian-Dog has one eye and two mouth tentacles which also act as sensors and four legs. There is no perfect white or black color to their fur. They do not have stripe patterns. Even with long hair, usually, the lower body will have short hair. Lifespan is of about 5 to 10 years.

Talyxian physical genders are different from Earth creatures, so whilst it cannot be said to be in the same vein with Earth creatures and hermaphrodite structures, technically, however, they are similar with regards to slugs or snails, where both dogs in the same couple which mate together get pregnant when conducting their reproductive measures.

They are superior in detecting foods and tools buried in the sand with their jaw-like tentacles. They are also sensitive to the detection of a sandstorm and foreign enemies. Generally, it is quite friendly to other people, and is preferentially keyed towards the interests of the person it deems the owner.

They have no wings unlike T-wolves and do not perform photosynthesis.

One of the biggest differences between dogs and wolves is that dogs need to eat, having a small mouth and small digestive organs. Furthermore, they do perform mating or unit reproduction. Several babies are raised during mating seasons, one child is born when conducting reproductive measures, but born in a very small state. In the case of unit reproduction, the appearance pattern will most likely be the same as the parent.

They will not reproduce if they do not have an owner. In the case of mating, they can have multiple patterns. Besides the gray, brown and other coat color, differences are recognized in the head and legs.

Because they are a creature which has adapted to the desert originally, they present a fair weakness to Miasma. There is no miasma present in the desert, therefore they are not a resistant creature toward miasma. Their sensations and danger sensing ability easily become unstable in places where there is a strong miasma presence. 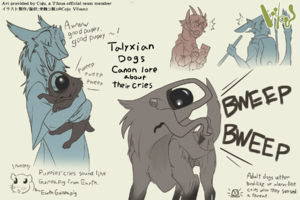 Example of cries which T-dogs utter.

Their voice resembles that of a bird or an alarm. Sensing a threat, they will emit a dissonant type of sound.

Puppies : With their utterly high-pitched and feeble cries, they sound similar to birds and alarm clocks in a "Pweep Pweep" fashion. Because their bodies are still small and immature, their cries come with a sort of "lag" to them, long enough to be heard as an organism. If you would like to hear similar sounds that may sound potentially the same in tune with them, we suggest taking a look at listening in on what Guinea pigs from Earth sound like.

Adults : Their cries also sound like birds and/or alarm clocks, but they are also able to utter various kinds of constant, at interval cries and sounds, almost machine-like "Bweep Bweep" fashion. They usually do not utter loud sounds, however, if they sense a threat, they will emit a dissonant type sound which can gradually increase in volume and tempo. They use several sounds depending on the distance from the object and the type of threat. If you would like to hear similar sounds which potentially might sound the same, the Windows 98 error sound or the Japanese earthquake emergency alarm are good examples.

The ecology of Talyxian Dogs perfectly depends on the role which helps Eltus people out, thus they have the intrinsic nature of a "Living detector". It is why they make sounds in order to attract people's attention.

Talyxian-Dogs are quite large. Pet type dogs usually take up a size comparable to Earth’s medium sized dogs, but Working type dogs (from the original species) and stray dogs, these can be compared to Earth’s large sized dogs, some even higher than that. (For points of references, usually from Beagle, Cocker Spaniel and Shibes size for pet dogs, and for Worker types and Strays, Siberian Huskies and Tibetan Mastiffs.)

It is the oldest, standard type. Most of these dogs belong to Reono as hound dogs, or Gold_Ring police dogs, sheepdogs, or southern sieg. Their color varies between shades of brown and gray, close to the sand, light tones to dark. Black colors will usually originate from the legs. Their tentacles are usually long, to facilitate dexterous tactility and sensing. Although there is no big change in the shapes of the head and tentacles, depending on the region and application, there are differences in the amount of hair and the shape of the mane. Many retain traits similar to wolves. They have a solid solidarity awareness among owners and humans.

Hound Dogs from the Working type : They help out hunters with the use of their ability to search and chase down prey. They will not attack their prey directly, however, instead, they will entrust this to their owner or hunter to help out with the finishing blow after they help successfully chase down their target.

Sheepdogs from the Working type : They are charged with watching over Talyxian terrestrial shellfish creatures which are recognized overall as "Tal's sheep".

Assistance dogs from the Working type : They are charged with helping out the disabled and sick people by offering their support in daily life and tasks such as picking up tools from the ground or carrying around a bag with the help of their sensory tentacles.

These "Working type" dogs can often be seen in large shopping areas such as Bazaars and malls, helping around as supporter dogs. They will announce the clerk if an object falls off the shelf or sometimes even watch customers in order to prevent shoplifting.

A group of dogs that naturally occurred in urban areas and do not have owners. They often act in groups or rarely act solo, searching for food with the help of their sensory tentacles. Heterogeneous talyxian influences are seen, and in general, the bloating of the mouth and abdomen mottling and mottled patterns, head and hair depending on individuals can also be seen. Many of their horns are degenerating. Not limited to the ones mentioned here, stray dogs may have shapes that have changed greatly. Although the influence of Talyxian-Stalkers is seen largely, stray dogs including such dogs have a consciousness of solidarity between Talyxian rather than humans, unlike ordinary dogs, showing a selfish aspect. Breeding is possible, and pet dogs were produced from here. Lifespan is shorter than normal dogs. They are often subject to extermination.

With regards to the #3 dog in the picture, they are a mixed-breed with a T-Stalker, due to this, they will have an obvious, much bigger mouth and stomach. Their front legs will be different from the rest of the T-Dogs.

With regards to the #4 dog in the picture, they are not a direct mix-breed with T-stalkers but they do have influenced traits from them and other various Talyxian creatures which originated from the Talyxian biome forest. People can take up furs from feral T-stalkers for usage in fur products, thus their furs may bring unexpected byproducts. Because these organic products made from Talyxian-Stalkers itself have nature that mediates elements of other creatures. And stray dogs can be influenced by these furs and adopt variance in their appearances.

Improved iteration of dogs, based on strays and working types, these dogs were kept in late Gold Ring and Shigu as indoor pets, due to their ability to soften peoples hearts as a cute pet animal. With their horns degenerated, their tentacles and physiques tend to be small. Various Talyxians are used, and various patterns are seen in the shape of the head and mane. On the personality side, the influence of heterogeneous Talyxian is seen, it has a consciousness of solidarity to the owner and at the same time, there is a selfish aspect like a stray dog. For example, they steal and try to attract owners. This is a behavior which is felt as cute to some Eltus, it is a property created according to demand. Like other livestock, licenses are necessary for creation. Their Lifespan is shorter than a normal dog.

They are sensitive to people's emotion. For example, some mischievous dogs may run away from angry people after they did something prank after they pull off a prank, and some may perform a comforting behavior for the Eltus person which may be sad or crying by using their lower jaws tentacles as their working hands.

Although one can see a lot of dogs mainly around Gold Ring, there are also hound dogs brought to the hunters of Reono. Since they are fairly weak to Miasma, they will be later introduced to the Shigu.

There are “stray dogs” with no owners in Gold Ring. This is considered to be due in part to people getting close to each other in the process of forming towns or villages in the desert. Stray dogs have various strains of Talyxian species, especially those that seem to have been crossed with T-Stalkers. Another reason is because they are not good at recognizing a specific or certain person if there are many people in a crowd or area. In such a situation, like a massive urban area, they are quick to fall under the same type of sensory confusion as if they were surrounded by strong miasma regions. Due to this, in high population density, some dogs may lose their sensation which helps them recognize their owner, and then they would quickly turn into stray dogs if left unattended.

They bare a close appearance to the T-wolves, the wild Talyxian-Associators, but it matters not if they are or are not direct ancestors, as in the era when they still appear in Eltus records, they already have working relationships with people and it is said that southern sieg considered dogs important property at the beginning.