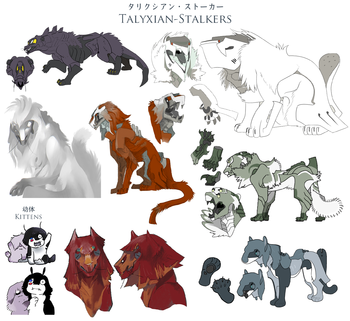 Talyxian Stalker (タリクシアン・ストーカー, also described as "T-Stalkers" or "Stalkers" for short) is a creature classification which belongs to the Talyxian organism group. They are comparable to felines on Earth, Eltus people will usually refer to them as just "cats" while the name "Talyxian Stalker" is treated as technical and scientific name.

Their presence can be confirmed within the Southern lands of Planet Tal mainly, especially Talyxian Biome forests such as the Lower Magoe, however, several numbers of them still can be seen within civilized and urbanized areas as well such as Gold Ring. They are generally known as one of the more common animals on Tal, but some of them may display a more 'humanized' behavior and lifestyle depending on the conditions surrounding them.

They have a wide variety and great individual differences in both appearance and personality, this variety could even extend towards a realm of ecology such as diet.

As for the common features, they share a quadrupedal form and other surface features which look like mixed organic and inorganic components, specifically on their head and various details on their bodies. They are, of course, not a machine, cyborg, or robotic beings in any way.

Consistent features of Talyxian Stalkers, as with most Talyxians, include a grey color to their flesh, tongue, mouth, genitals, and blood.

The inorganic-looking surface of certain parts on their body such as head, legs, back, and tail, are composed of fur that has been compressed and has hardened which results in these parts being incredibly robust. The hardness is similar to that of a rhino's horn composed of keratin, but the actual biological makeup of these parts is still unknown.

As their individual differences in terms of appearance are really great, it's difficult to find consistency or guideline rules on their appearance except for some common features such as quadrupedal form, tough physical build, and strong jaws. They also feature retractable claws like those of felines on Earth, however, it's still pending whether this is something that all Stalkers have or not.

As they are not a machine, cyborg, or robotic beings in any way, their whole design would not form obviously robotic or common mecha style overall. It means they do not display or own a body part that explicitly causes people to interpret as some sort of artificial objects or tools. Some Stalkers still might have these elements, however, they still provide those in quite vague and hazy design, in a level which "might barely look like something else." In addition, as they are alien beings, considering them as just organisms that partly have angular shapes is much better than considering them just like a "half mecha cat".

Their lifespan may depend on the individual, however, some may live more than several hundred years.

Parts of The Face

As their individual differences in terms of appearance are really great, it's difficult to find consistency or guideline rules on their appearance. However, as a common trend, their face rarely forms an appearance that people can recognize easily as a 'face.' Many types of Talyxian Stalkers faces often display an appearance which "barely looks like a face" due to their chaotic and alien features of the parts which make up the overall construct of their face. A sense of pareidolia might be a good tip that could explain "barely looks like a face," for example, a few circles and a line may be identified as a "face" from people's viewpoint.

Worthy of note, their sensory organ corresponding to an 'eye' is noticeably complex and diverse. There are various types of their eyes, the number, shape, and position of these also greatly depend on an individual basis. For example, some Stalkers may have a multitude of eyes, in different formats or arrangements, rather than just a simple pair of two eyes, some may have asymmetric numbers and the shapes of their eyes on the left and right of the face can differ. Even more, not all of these eyes have a pupil. Also, these eyes may be depicted to look as if glowing in some artworks, however, it's nothing but an artistic expression. Biologically speaking, their eyes do not feature any sort of bioluminescence or glow.

The details of their sensory organs corresponding to an 'ear' and 'nose' are still pending, however, these things do not form excessively similar-looking shapes with that of felines on Earth.

Some stalkers have a pair of single whiskers that look like an insect's antenna which grows from a small hollow, located on their face around the upper jaw.

They usually do not perform communication through cries, however, they have a unique vocal organ that functions akin to that of parrots, they can imitate and perform sounds which sound akin to voices and that of what people say alongside various sounds, regardless of their natural or artificial origin.

Unlike cats on Earth, they do not have common types of cries. However, when they make a natural cry, it generally sounds like the short-length screech that monkeys make.

They share a high intelligence, however, whether they can talk or can adopt a civilized lifestyle, or cannot either, it really depends on individuals, their various situations, such as the surrounding environment and each one's own curiosity.

Almost all of the Stalkers which live in a realm of Talyxian Biome naturally adapt themselves into a lifestyle as a wild animal, these Stalkers cannot talk in most of the case unless they have some sort of opportunity in which they can establish a relationship or contact with Eltus people.

One of the more noticeable features is that they potentially exhibit a pretty selfish nature within their actions and purpose because they generally act mainly on self-preservation instincts. This nature is reflected in their usual behavior and manner, it's obviously contrasting from those of Talyxian Dogs which voluntarily go out of their way to help Eltus people.

They are generally considered to be carnivorous, many Stalkers hunt small-sized Talyxian animals such as rats and bugs.

However, all of them still cannot be defined with a consistent diet because there is still an individual that is outside of this standard; Mizore a male Stalker, displayed on the right of the upper gallery, he does not hunt and instead eats minerals or trophoblasts that adhere to the surface of shellfish type creatures crust while using his firm and sharp jaws that function akin to a hand plane tool.

Large-sized Stalkers, depending on the conditions surrounding them, may choose Eltus people as their prey.

Both sexes share a slightly protruding duct for an anus. Males testicles are housed within the body as seen in reptiles and fish on Earth.

They feature a different position of nipples between males and females: male nipples are located on the upper chest as in Earth humans, mature females have multiple breasts on their abdomen as in common quadrupedal mammals on Earth.

Generally, all newborns are born as hermaphrodites, which own a set of an extremely small phallus and vulva and carry both testes and ovaries within the inner body. When they have hit puberty, each individual would choose what set of genitals they will keep, and this determines their gender for the rest of their life. Newborns have nipples located in the middle of the abdomen which develops into one of the above sets according to one's chosen sex.

Their "gender choice" is determined as a result of the integrated complex elements through various conditions surrounding them, such as each sexual trend, their partner's gender, environment with regard to the reproductive situation, and how they sexually identify themselves. Due to this, adult Stalkers may have a variety of sexes to pick: ranging from solely male or female, to hermaphrodites as well as intersex.

:Notice: Information in this section is still available, however, due to the WIP nature of their biology, it has not still been strictly defined as standard that all Talyxian Stalkers share. Some elements in this section may change greatly in the future.

They are basically treated and seen as "an existence which is the middle point between animal and human" from the view of Eltus people. However, given the behavior and usual lifestyle that each Stalker undergoes, these elements would be greatly reflected in the manner in which Eltus folks treat them individually.

For example, if some may prefer to stick to their natural lazy feline behavior and do not hope for civilized life, Eltus folks will treat them as just an animal.

If some may want to be civilized and manage to imitate the Eltus lifestyle, Eltus folks may recognize them as a human. However, it really depends on how much a level of humanized behavior and lifestyle that they can constantly perform.

Due to various reasons behind a social treatment of Talyxian Stalkers, a spiritual relationship between Eltus races and T-Stalkers is still not perfectly equal and fair.

For example, if there is a couple formed between a member of the Eltus race and a Talyxian Stalker, which entertain a romantic relationship, people would stare at them curiously, even go as far as to make fun of their relationship.

One of the major reasons behind this mentality is based on the premise that their human rights are not guaranteed naturally unlike that of Eltus races, and another one is that some aspects of their behavior and attitude based on animal-specific sense and nature still remain in them more or less. These elements often do not have compatibility with a common sense of Eltus folks, as a result, Eltus people may deem those as strange or thoughtless manner that Talyxian Stalkers do.

Within Gold Ring, there are several numbers of Talyxian Stalkers. They are generally treated as one of the wild animals that inhabit the nation, however, some Stalkers may be recognized as a race, or part of "Talyxian races", after RC 70.

Still, many Stalkers are treated just like "talking cats" and those actually perform a lifestyle exactly like that.

However, some Stalkers may have a strong curiosity to have more humanized behavior, these Stalkers manage to imitate what Eltus folks usually perform. These Stalkers may obtain occupation and legally registered residence, however, it strictly depends on a humanized level of their behavior and capacity.

If these civilized Stalkers could take a job on Eltus society, they generally work on auxiliary tasks that utilize their animal-specific nature and function while leaving a major task up to Eltus folks.

After year 70 of the Rain-Calendar, new Gold Ring laws employed conditionally guaranteed the 'human rights' for Talyxian Stalkers who have passed through legal procedures at the public office.

They are required certain conditions such as the presence of stable residence and regular occupation. These elements strictly test them for a level how much they can be socially recognized as a human.