The Reono flag, representing a desert road. Green represents the color of Eltus plants and their soul energy. The black symbols represent wagons or camels.

Reono (レオノ) is a region that spans from the Eastern to the Middle area of the Eltus region on planet Tal. Sometimes referred to as "Reono Land", it is where Eastern sergals and Eastern agudners call home. Reono features a long road that carries trade from Gold Ring in the South to both Eastern and Middle areas. This trade route is vital to the Eastern economy. Reono has a culture similar to what is found in the South, and are renown for their aptitude to produce expert hunters.

Reono is composed of trade-based villages and towns populated by mixed-breed Eastern sergals, and agudners. Many of these sergals are Southern in origin. Much of their culture and technology was influenced and imported by these southern sergals, such as their long-term cohabitation with agudners and a police force similar to the Gold Ring Vigilance Committee. 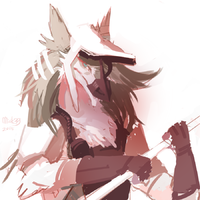 Approximately 120 years B.C.E., a detachment of Southern sergals moved into the area in search of natural resources. They settled near the Eastern mountain range known as the Lyvank Mountains. At the same time, another group of Northern sergals moved into the area. The two factions of sergals met and eventually formed the Reono Clan, an alliance to serve as a base for both hunting and trade between the north and south. Because of their collaborative relationship with sergals, agudners also moved up from the south. This resulted in Reono having a strong population of both agudners and Eastern sergals.

The majority of Reono citizens are comprised of agudners and Eastern sergals, both having southern origins. Some residents are Southern sergals who have permanently immigrated or are merely migrant workers. Nevreans are a rare sight early on due to language differences and distance from their homeland of Nevrea. Eventually, nevreans do travel from Gold Ring to Reono as workers and traveling merchants.

Due to the open trade with the city of Gold Ring to the south and mix of races, Reono is a relatively developed civilization. They enjoy a similar culture to Gold Ring's and a technology level that is nearly as advanced.

Hunting and extracting resources from wild creatures is a very prosperous industry in Reono. Due to their excellent hunting techniques, Reono is renown for having the greatest hunters on Tal. Associations exist that manage both hunting and sale of resources from game taken. These include an official Hunting Club, as well as both commercial and industrial partnerships. The majority of those involved in these hunting organizations are sergals, which due to their friendly nature encourages fair practices.

Sergal armor from Reono is made from ceramics and was developed independently from the sergal armors from Southern regions. This is due to the fact that most metals come from the South, while materials for ceramics are prevalent in the East. As agudners became involved in ceramic work, their contributions lead to higher quality armor. Before the advent of ceramics, materials extracted from wild creatures could also be fashioned into armor. This practice continued, especially in the North, as such armors were cheaper and easier to fashion. However, the overall design of armor changed drastically due to the World War lead by Rain Silves and the Shigu.

While not possessing a standing army such as the Shigu, Reono does have an active militia system. During states of emergencies, those enlisted to aid gather and carry out their duties. They are compensated with a salary and are given special training as needed.

Upon the appearance of General Rain, Reono was attacked by the Shigu Clan and was brought under their control. Many of their weapons, soldiers, citizens, technology, and other resources were seized. Agudners were kept and treated as slaves for research and development of military technology due to their intellect. Because of this, Eastern sergal armor was revised purely for combat use. This in turn augmented the Shigu's military might due to advanced weapons and armor. The resulting armor design became the de facto standard of ceramic-based sergal armor.

Note: This article only has modern information. Old history and canon went to the "History of Vilous Development" article. In New Age canon, The group that correspond to southern's is changed to the Gold Ring vigilance committee. Spelling had been fixed as "Reono" from "Laono".