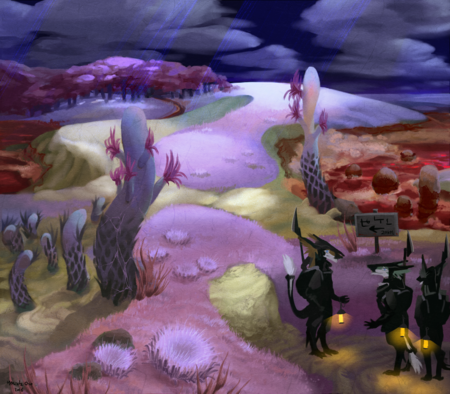 Three Sergals adorned in armor and equipment to adapt to an alien environment in Talyxian biomes, are exploring on a plain within Thekan region, just a front of a forest. On aside the hill, there is a red river called Blood River, a Talyxian water place.

Talyxian Biomes (タリクシアン植生) are the colonies of fauna and flora classified under the Talyxian organism group. They are usually the most common and definitely a majority on the Planet Tal. Most of the naturally occurring communities such as forests and watersides on the planet correspond to this realm.

Talyxian plant life does not contain chlorophyll and functions akin to a primitive animal. Due to this, most of them show strange and alien-like appearances which are occupied by purple-ish or grayish tones instead of green-based tones. They share almost no contrast with life found on Earth.

As they show greatly different features from fauna and flora classified under the Eltus organism group, Talyxian Biomes may be referred to as "Alien Biomes" by the Eltus folks in colloquial language.

This article describes what is treated as "plant" customarily.

For convenience, Talyxian organism creatures considered "plants" are still referred to and treated as "plants" in both canon context and colloquial language, however, biologically, they are totally different and far from the definition of plants on the Earth and those classified under the Eltus organism group.

Unlike plants on the Earth or those Eltus own, all of the Talyxian plant life do not have chlorophyll. Their tones are occupied by tones that are contrasting or far from green-based hues, such as purple, pink, red, orange, blue, or monotones such as white, gray, and black.

Also, their biology and behaver function akin to a primitive animal. As some examples; There are kinds that look like bodily organs such as animal's muscle, blood vessel, and internal organs, as well as kinds that look like marine invertebrates or sessile organisms such as corals, barnacles, sea anemones, sponges, and basket stars.

In the classification of Talyxian species, the biological boundary between animal and plant are very ambiguous and complex, many of them cannot be defined strictly as "plants". Many species of the Talyxian plant can move around like animals. Some species begin as the state similar to the plant, and when grown to some extent, completely turn into the form which can be said as an animal, and initiate activity as the second stage of their life.

The primary groups in the Talyxian organism are divided into two broad groups:

Also, bluish colors also can be seen in both groups, as bluish purple or bluish-gray.

All of the plant life classified under the Talyxian organism group do not have chlorophyll, unlike plants on the Earth and Eltus plants. But they can also obtain energy by photosynthesis, rock decomposition, and geothermal conversion. Also, there are carnivorous plants that live on eating prey. Depends on the size and ecology, they can victimize Eltus race people. As all Talyxian species creatures avoid intake of salt, upon eating a creature that contains salt, will excrete "Hizomi-Nonbon" in order to get rid of salt from inside their organ. When they are exposed to the effects of salt in the long term, their life activities are extremely weakened and their all activities are deterred and become static.

Carnivorous plants include aggressively active species which move like animals and species which have static behavior but attract prey while using various ways like producing hallucinogenic gas or scent. Mitako-Kaidan which appears on Episode 2 "Dark Clouds of Shigu" is a noticeable example of the latter kind.

Many of species which belong to the red group are aggressive and harmful to Eltus people and have potential unknown risk while they are often used for foods or material. In order to use them safely as material, people need to pass the process through which makes it salted to nullify their activity.

In contrast, bluish ones and many species that belong to the gray group are comparatively harmless to people and having a static nature. They are easier to process or use as a material than red group plants.

In the deeper parts of the large-scaled Talyxian biomes such as the Northernmost primitive forests and Eastern forests, some kinds of Talyxian organisms produce a strong miasma. This gas generally brings various bad effects on the spirit and the brain of Eltus races. Due to this, Eltus folks usually need a protective device similar to a gas mask when traveling in the depth areas located within the Talyxian biome in order to avoid absorbing miasma.

Thought the forests and the creatures in it are mostly considered harmful to settlements and the Eltus people, things that are harmless to them are considered edible and hard parts are used as building materials. It is common for hardened felons to be used to try out new substances to check if they are edible or poisonous, they continue these tests until they die.

When people discovered that salt is effective to weaken Talyxians, some settlements would disinfect water with salt and treat the land with light saltwater to discourage them from trespassing.

Creatures and parts of them that are safe, beautiful and have a good fragrance are often sold for ornamental use. They can be processed into various items such as living goods, building materials, chemicals, and weapons. In the eastern part of Gold Ring, sphere-shaped fruits are cultivated from specific rocks and turned into fuel for lanterns. Most of these materials are disinfected with saltwater before processing. 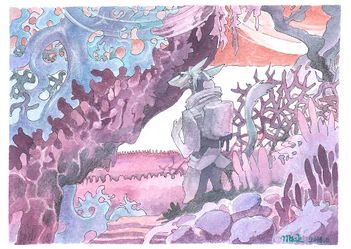 The time period is not determined, however, the Sergal presented in the artwork is wearing a Reono styled outfit, they are visiting the border where the Astna and Thekan meet in order to scout in advance for suitable materials such as Talyxian 'resin trees', the blue translucent trees. Due to their light set of clothing, it can be easily assumed Eltus people's village exist nearby.

Biomes which are located in between the main areas of a Talyxian biome realm and areas outside of them are defined as border regions. These regions are generally characterized by specific and unique natures which are different from that of which normal biomes regularly have.

Most of the areas in Astna are composed of wastelands or plains which feature few Talyxian biomes. The few biomes which can be found at the boundary with the forest areas are characterized as having a comparatively low mutability ratio and are static in nature.

Talyxian plants in these areas are known to display a regularity or pattern to their shapes, similar in aspect to what Eltus plants have. These plants serve as a resource for Shamans and Northern Reono people.

The state of these biomes is considered to be the result of Talyxian Wolves, which have lived in these areas for a long period of time and have continued to cut away and trim at the flora and fauna in order to divide and mitigate it. (Of course, the deeper areas of the forests may be exempt from this condition.)

Included in the various flora presented are the horsetail-shaped weeds that were often seen in the Vilous manga episode 4, "The Twelve Plainswalkers." Depending on the conditions of the environment, these weeds are able to shift their coloration within a rough spectrum consisting of purple, beige and light blue.

The Talyxian biome forest bordering the desert such as presented in the artwork is a very familiar sight to Northern people, scenery such as this can be seen throughout the whole of Northern habitable areas. Beyond the Talyxian forest line, the desert can be readily identified as a yellowish-white horizon.