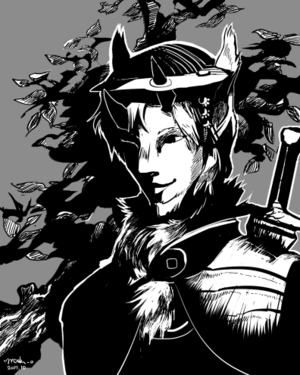 Agudners (アグドナ Agudona) are a roughly humanoid race having features similar to various mammals such as rabbits, squirrels, bears, bulldogs, monkeys, and even-toed ungulates like goats, sheep, alpacas, cattle, pigs, boars, and llamas. They are one of the three sentient and sapient Eltus races who are regarded as "human existence" on the planet Tal.

Like Sergals, they have a large population. They are found throughout the continent except in Nevrea (in the west). Their primary habitats are southern and eastern lands, but there are small numbers of Agudners in northern lands also. Their features (appearance, behavior, personality, and gender differences) are the most similar to humans of the Eltus races.

They have very skillful hands, and can tighten a screw and drive a nail some without tools due to their deft fingertips and strong fingernails. Also unlike Nevreans, they are good at duplicating objects due to their abundant stamina. Most of them excel at inventing and craft works. As a result, Agudners generally excel in roles such as craftsmen and engineers. Many Agudner craftsmen contributed to the development of the civilization. Many Agudners who lived in the east were plundered as technical slaves by the Shigu Clan during the conquest of Reono.

Their appearances, behavior, acts, personality, and gender differences are the most similar to humans of the Eltus races. Agudners experience strong "emotional attachment" unlike Sergals and Nevreans. For example, Agudners are generally monogamous, and families raise and remain strongly attached to their own children, in contrast with Sergals, who are frequently not monogamous, and raise children communally.

Agudners make many appearances in concept art, but an official species reference has still yet to be completed.

Agudners are the most human-like of the Eltus races. Females have breasts like human women, unlike Sergal and Nevrean females.

They have from 2 to 6 horns on their heads and are often covered in short, brown and tan fur. Green or blue fur is not a natural feature, but some Agudners choose to dye their fur.

Compared to other Eltus races, their builds are tougher and stronger. They show persevering strength due to their superior stamina.

Their faces are structured vaguely like a combination of a human and a goat, but with a short muzzle. Their muzzle/nose shape is similar to that of the tip of a Sergal's snout, but pointed more downwards, rather than a human's nose.

They generally have two to six horns, but in some rare cases may only have one. When they grow a single horn, it is not located on the center of their head (like a rhinoceros or unicorn), but rather on one side (i.e.: right or left).

Their ears are very thin, and always stand up straight. Many Agudners have slanted eyes; most of them have black eyes like East Asian humans on Earth. Their pupils are oblong like goats.

They have little fangs, like those of a wild boar. Some Agudners fangs protrude from their mouths even if their mouths are closed. This is more common among males. Their teeth are similar to pigs'; they have front teeth, cuspids, and molar teeth. This jaw structure allows them to handle almost any conceivable edible material and supports their omnivorous dietary habits.

Their mouth and throat structure, unlike Sergals and Nevreans, is not suited for swallowing food whole without chewing.

Although they will not often cry like animals, unlike Sergals and Nevreans, their natural voices are low-pitched. The sounds they make when it does happen are similar to the bunnies' cry or bulls/cows' snort, something like a soft bleat or pronouncing a "B".

Agudners have four fingers. The thumb and ring finger are short, and the index finger and middle finger are long.

Their legs, like the other Eltus races, are digitigrade. Their feet are hoofed, and have two central toes.

Their tails are short and made of fur that's always protruding upwards.

They are completely omnivorous, like pigs, monkeys, and humans.

Their teeth structure, optimized for chewing, enables them to eat almost any cooked food.

Although they are generally known as a pacifist race, "Emotional deep attachment and passion" (e.g: jealousy of a partner or technique) is a property unique to their nature, and not exhibited in other Eltus races.

The cause of this unique trait is, among the Eltus Races, only Agudners care for their children by breastfeeding.

While most are peace seeking, they can be prone to grudges, unlike Sergals. They can and would lynch an evil-doer as a group out of vigilantism, even if it could be considered a crime to do so. If everyone considers it justified, it will be overlooked.

That aside, they are also prone to jealousy and envy if they aren't noticed for their merit or what they can do. When they see an ability and a technique that is superior than themselves, they struggle to get it.

Agudners might typically appear affable, easy-going, and approachable, but they are not beyond becoming hostile if it comes to protecting themselves.

They generally stick to one partner and have a strong desire to monopolize their partner, unlike the culture of Sergals. Especially among females, they stick to their own biological children and exhibit strong emotional attachment to them in comparison with Sergal females. Despite this, they are capable of integrating into the non-family-centric social structure of Sergals.

Their family form is very close to a social form. It is not uncommon that one factory or school is founded entirely from a single family.

In prehistoric times, their culture was separate from that of Sergals, but upon meeting each other, their primitive cultures co-developed. Specifically, they depend on the strength of Sergals, and have lived under their protection. They greatly value Sergals' biotical abilities, meanwhile Sergals depend on Agudners' cultural abilities. This relationship of Sergals and Agudners evolved over time to become the origin of basic religious concepts in Gold Ring.

Male and female Agudners have separate roles in society, similar to "traditional" human gender roles. For example, if something heavy needs to be moved around, males will take care of it, while females will nurse children and possess strong maternal instincts.

Before they begin to cohabitate with Sergals, their society was patriarchal (male dominated), and males assumed the role of protecting the females. Power struggles and fighting between males effectively left them a barbarian race. The encounter with Sergals led to a major shift in their lifestyle.

Their sexuality, like other traits, is the most similar to humans of Earth among the Eltus races races. Heterosexuality and homosexuality is normal for both female and male. And as the historic convention, Agudners has sexual and marital relationship with Sergal are not uncommon.

Their abilities are very well suited for jobs that require fine motor skills or concentration. A typical Agudner occupation would be a craftsman, blacksmith, or an engineer. They have brought great innovation to every technique; for example, they create most craft products sold by caravans, and their fabrication techniques served as the origin of Sergal armor design.

The "comb" is the most famous Agudner invention. They sometime use combs for catching fleas.

They can't groom with their bare hands due to their structure. Instead, they nestled close to each other in closed pairs and shared physical contact, until the invention of the comb. Sergals can groom bare handed, and there is a grooming culture among them. According to one view, Agudners might invent a comb for Sergals to groom their backs. (In another view, they might have had combs since the distant past.) This history is an example of their collaborative relationship. In modern times, many schools teach it as important knowledge, similar to how the development of fire by humans is taught on Earth.

Agudners are native to every part of Tal except Nevrea in the west. They might have lived in rocky caverns or a caves without definite groups.

Southern Agudners had a considerably male-dominated, barbaric culture until they met Sergals.

Northern Agudners were few in number and generally quiet fellows. Of those, a small number joined Northern Sergal communities.

Most of origin and prehistoric culture of Agudners is still unclear.

They greatly value Sergals' intuition, strength, and a good sense of the natural environment, and depend on Sergals for protection. In contrast, Sergals are supported by Agudners' cultural and intellectual abilities. In its entirety, the relationship between them can be symbolized as this: "Sergal is father, and Agudner is wife." Agudners gave up their primitive culture (male-dominated society with war between the males) through this relationship.

A concept of the Agudner religion in Gold Ring is based on this historical relationship. "Gold Ring" is not only the city's name, but also the religion's.

A few reasons that Agudners generally live with Sergals: They feel charmed by Sergals' good vibes, and light-hearted characters, and intuitive sense. As is their nature, they yearn to develop such a sense. They take particular interest in Sergals' intuition to judge their natural environment, especially their ability to instinctively understand primitive creatures. Agudners try hard to copy this ability, which is intrinsic to Sergals, and to simulate Sergal abilities with their technology and inventions.

Agudners prefer to use hammers, maces, long-bows, long-swords, axes, automatic bows, guns and so on.

They can handle most weapons and shields, unlike Sergals and Nevreans. They are good at close to middle range combat, like Sergals, but they are effective at longer ranges as well because they can handle projectile weapons. Their remarkable physical strength and manual dexterity make them effective with a multitude of weapons. A fully armed and armored Agudner can be one of the strongest among the Eltus races.

An unarmed Agudner can attack with powerful blows by hooves, kicks, or by headbutting with horns.

They have most kinds of martial arts, and they have good power with both running and standing attacks. They do heavy blunt damage at close range due to their stout bones and hooves.

Their physical strength is toughest among Eltus races, they possess remarkable endurance due to their abundant stamina. Their ability to inflict damage when unarmed is not as severe as that of Sergals' running attacks, therefore they generally rely on weapons.

Agudners lack speed and agility, and their running speed is slowest among Eltus races. Their endurance and stamina is outmatched by Sergals though it exceeds that of Nevreans. Their greatest strengths are that they can fight effectively at both close range and longer ranges. They can arm heavily due to their superior physical strength, and they have effective blunt attacks when unarmed.

However, they are very weak in combat situations requiring aggressively striking first, therefore they are not good at sweep war and hunting. Generally, their strength is in defense, and combat with a few enemies, as their defensive ability is pretty good, but their powerful attacks are limited to counterattacks in many cases.