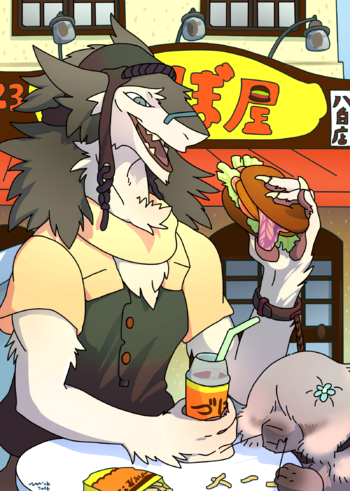 Eastern Sergals (東方サーガル) are a genetic hybrid of their Northern and Southern neighbors. They live mainly in the middle, Southern, and Eastern regions of Tal. Their territory is not clearly divided like the Northerners, although they are most abundant in the East and central regions, and they are also common in the South. They share the Southerners strong relationship with the agudners.

The Reono land’s territory covers the middle eastern region of Tal. The Eastern trade routes are straddled by autonomous communities of mixed-breed sergals and other Eltus races. The Reono are adept at securing natural resources, leveraging skills and technologies developed jointly with the agudners.

Main article for common features of all Sergals

Eastern sergals benefit from [vigor (heterosis)], so they are even burlier and larger in build than their Northern ancestors. Their ears appear relatively small in comparison due to the rugged build of their skeletons.

Deep, darker, heavy colors such as black, deep gray, deep brown, and deep green are common fur colors. Since their popular culture is inspired by their Southern neighbors, they may often dye their fur with vivid and exotic colors. Thus, there are multifarious color patterns via postnatal fur-dyeing.

Sergals have no difference of outward, physical, ecological features and roles between genders with the only biological difference being the genitals. The only differences between the two sexes vary between individuals at the surface level due to their mixed genetic heritage (Easterners being a hybrid between Northern and Southern Sergals respectively). Elements such as their culture, clothing articles and even behavior can vary depending on their inherited traits.

They share strong cultural similarities to the Southerners such as their relationship with the Agudners. Having developed advanced hunting techniques that leave them with fewer natural enemies, they do not share their Northern ancestors' fear of their natural surroundings. They enjoy competitions of strength among themselves but are rarely violent. Sporting events are also popular in the Eastern territories.

Their advanced hunting technique has allowed them to hunt primitive beasts with great success. However, their tendency to see forest resources as infinite and their aggressive hunting of beasts has sometimes led to a high casualty rate. Some Eastern sergals wear their own hands and feet — severed during encounters with beasts — as trophies.

The Miasma Forest which is seen in a Northern lands exist in the East too, but Eastern sergal hunters avoid it with technology unlike Northerners who adapt themselves to the environment.