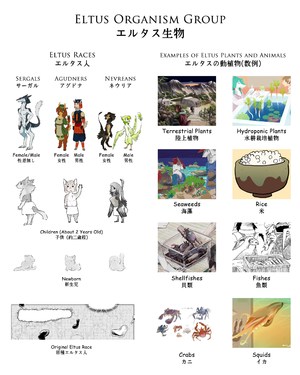 A general overview on the Eltus Organism Group, which is comprised of the Eltus races, Plants, animals as well as the ancestral, original Eltus race of people.

Eltus (エルタス Élutasu) is the organism group which covers both plants and animals, consisting of plural kinds. The main and representative races on Planet Tal, Sergals, Agudners, and Nevreans, all fall under this group as part of the three Eltus races.

In contrast to Talyxians, all creatures which belong to the Eltus organism group can be identified by them sharing a lot of biological features which are similar to that of creatures found on Earth. However, due to the biological fact that there are some kinds of creatures which share mixed traits between Eltus and Talyxians, they cannot be defined as perfect, distinctly separated organism groups. Meanwhile, in the cultural sense of Eltus folks, they generally consider Talyxians as alien beings, different existences from Eltus organisms and distinguish themselves from them.

Aside from the existence of Eltus races, organisms which belong to the Eltus group and their flora are very few in number, a rare sight on planet Tal, and can be found in very limited places. due to this, when mentioning the single term “Eltus”, it generally refers to the races.

In contrast to Talyxian organisms, all Eltus creatures feature quite a strong salt resistance. Due to this, highly salted places are one of the viable conditions in order to protect and keep Eltus biomes.

The Eltus race (エルタス人 Élutasu-jin), also referred to as just “Eltus” or “Eltus people / folks”, is a racial group of sentient species that belong to the Eltus organism group. This racial group is composed of the three well-known humanoid species that have many features reminiscent of Earth's animals: Sergals, Agudners, and Nevreans. They are also called "the red-blood people" due to the fact that their blood contains red blood cells.

All of the three kinds of species are treated as the same group of races, the Eltus race, however, they are unable to reproduce or cross-breed between different species. For example, Sergals and Nevreans can not bear children between them.

Within the canon story, all Eltus races consider and recognize themselves as "human". Because of this, they call each other "human" as a conceptual recognition. In addition, their civil rights are treated as "human rights".

Originally, they were a single race that looked completely identical to that of humans on Earth. However, their bodies have turned into half-animal bodies and separated into three kinds of species written hereinbefore. Thus they retain a sense of recognizing themselves as human beings, although as a whole, they are unaware of their original human form.

When we mention "Eltus race(s)", it usually means the modern Eltus races that have three species and half-animal appearance.

They are featured by containing red blood cells and having four fingers on their hands and feet. Their internal anatomical build is basically the same as most of the creatures on Earth. However, the structure of their digestive organs and sense of taste are completely different from that of humans and animals on Earth.

The common appearance of all newborn Eltus offspring is that of a small, gray and fluffy body. After they pass 2 years of age in Earth’s time, all of their furs are completely regrown in their respective, natural color. However, only Nevreans are an exception to this. While Sergals and Agudners begin to grow into their natural appearance after 2 years, Nevreans will still keep gray plumages as a whole, and not display gender differences throughout their infancy. Nevreans will finally begin to experience a big, physical change when they have reached puberty and attain distinct, sexual dimorphism. See Also: Nevreans - Children and Adolescents

All Eltus races have more-or-less Talyxian organisms inside of their internal organs and tissues naturally (similar to mitochondria found in the cells of Earth creatures). Due to this fact, they put themselves at risk of getting a mutation if they eat a lot of the black type of Talyxian organisms that have a function of Parasitoids. Due to this, Eltus folks who are culturally matured and civilized generally do not like to eat black Talyxians.

Their sense and style for a sexual relationship and family are greatly different from what humans on Earth usually have.

Eltus folks who live in a group of joint-family generally distinguish their "partner to make a child" and "a prospective suitor" as a different thing. Due to this, they necessarily do not require a marriage even if in a case that someone made a child between others. Because they usually raise children in a group and combined society, the individual need for childbearing is less than for family units of humans on Earth.

Noticeable uniqueness in sexuality in common sense which all Eltus races share, homosexual relationships basically do not receive an antipathy or aversion from society as unproductive behavior. Because Eltus races cannot reproduce between different races, "romance between different races" and "romance between the same genders" are considered equally. In addition, a pansexual nature that Sergals have emphasizes this style.

Couples consisting of different species can not conceive a child, however, as they always experience an increase and flourish of the population in a group of joint-family, they have no concern about a population decrease from their lack of procreation.

Sergals and Nevreans feature that they do not weight on their biological children for a special purpose as all children in a range that they should care about is just equal value for them. However, only Agudners are somewhat different in nature from this.

Agudners have a strong sense of familial loyalty for their biological children. They tend to give priority for their biological children, this behavior features that they have a strong "emotional attachment" and "quality compassion" for their own biological children. Additionally, in sexual relationships, they rather prefer to remain with a single and fixed partner. Because of this, some Agudners may not prefer accepting the polyamorous style behavior in sexual relationships that Sergals do. However, this discrepancy rarely reaches a serious and deadly situation, due to this, they still usually are able to live together with different species in peace.

A long time ago, the people formerly known as Eltus, consisted of a single race and had an appearance that was identical to that of humans on Earth.

One day, an environmental catastrophe advanced to deadly proportions and the "mock living things," fabricated creatures called Talyxians, came to occupy the whole planet as a new ecosystem, in order to keep the planet alive. The oceans and many Eltus species creatures drastically decreased.

The Eltus people's bodies changed to resemble animals, and were divided from a single human form into three parts Sergal, Agudner, and Nevrean.

Aeons later, the people of the Eltus and their respective races still retain a sense of recognizing themselves as human, although as a whole, they are unaware of their original human form, and of their original culture. Planet Tal has totally changed into an alien wilderness, covered by Talyxian Biomes. People try to save Eltus Biomes on a daily basis in order to revive their original environment while surviving in the harsh and strange Talyxian environment.

All of the Eltus people whom live in modern times do not know nor record this as a historical fact however, the incident is still partially recognized among Eltus folk as a form of myth. See also: Myth on Gold Ring that describe the origin of three Eltus races.

Eltus biomes, the colonies of Eltus flora and fauna, are definitely a minority on the planet Tal and exist only in limited places. All Eltus folks treasure Eltus plants and animals, day after day try to protect them from erosion by aggressive Talyxian organisms, and attempt to increase their numbers.

In the sense of Eltus folks, ingredients originated from edible Eltus creatures are considered as the highest grade of food for the Eltus people. Eltus fishes, Eltus rice, and a part of seaweeds that are farmed in Salt Lake ColVilous are representative and popular Eltus ingredients as they have kept a quite amount at a feasible level for mass consumption. However, as their production area is virtually limited to Gold Ring, folks in other regions need to transact through trade merchandise in order to get them.

Plants that belong to the Eltus organism group feature the presence of chlorophyll and display an appearance that is similar to that of common plants on Earth. Due to this, they are also known as and called "green plants" among Eltus folks.

As they are a fairly rare sight, they are recognized as highly valuable, desirable, precious items among Eltus folks.

For now, only two places are confirmed as the main habitation of Eltus plants: The protected Eltus plantations within the Gold Ring nation and the Eltus biomes sanctuary on summit areas of the Lyvank Mountains.

Within the Eltus biome realm, Eltus animals that belong to the Eltus organism group are present. Like Eltus plants, they are extremely very few in number as well. As all Eltus organisms do, they also have similar appearances and biology to creatures on Earth.

Currently, aquatic creatures that live in Salt Lake ColVilous are confirmed to exist. Fish, crabs, squids, and shellfish. Eltus shrimps have already been brought to extinction, and the presence of Eltus octopus is still unknown.