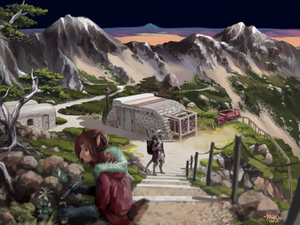 Eltus people are working in the Eltus biomes sanctuary on summit areas of the Lyvank Mountains. A Sergal is carrying tools while an Agudner is gathering a sample from an Eltus flower for research.

The Eltus Biomes (エルタス植生, also referred to as Eltus-Plants when only plants are shown) are the ecosystem and the colonies of Eltus species and creatures on planet Tal. It's generally populated by Eltus races. The plants in this ecosystem are referred to simply as "Green Plants" and have chlorophyll, similar to plants on Earth and unlike Talyxian plants.

There is very little Eltus biome on Tal, and what exists is easily eroded by the surrounding Talyxian-Plants. All Eltus race people treasure it, and try to protect it from erosion by Talyxian-Plants. The seeds of green plants are considered as valuable as gold grains, and people sometimes use them in place of high denomination currency, but their high value regularly encourages counterfeiting.

The Judda, as a concept, exists in part because of, and to describe, the exotic properties of the Eltus biome. As a result, among the Eltus races on Tal, the color green (and green objects and people) are revered as being pure and of great value.

Eltus plants prefer salt unlike plants native to the Talyxian biome, and Eltus biome algae and seaweed are actively cultivated in coastal places. Any ingredients found naturally in the Eltus biome are considered the highest grade foods for Eltus people. Among other things, algae, seaweed, and fish are farmed in Salt Lake ColVilous.