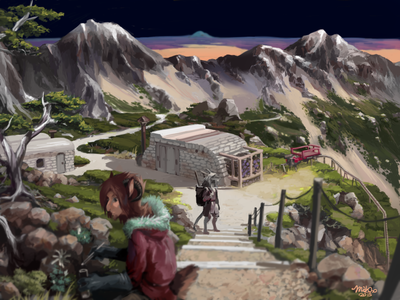 Eltus people are working in the Eltus biomes sanctuary on summit areas of the Lyvank Mountains. A Sergal is carrying tools while an Agudner is gathering a sample from an Eltus flower for research.

Lyvank Mountains(リベンク山脈) is a very precious place that has Eltus-Plants located on the northeast of Tal. It ranges from the Shigu Clan to the Reono Clan. Its alpine zone also has a precious source of salt, and precious Eltus-Plants that are called "Green Plants".

During the first year of the Rain-Calendar, Gold Ring and Reono had cooperated more. They worked on a search, mainly to find precious sources of water and places with little to no presence of Talyxian-Plants. They were attempting to protect and help the expansion of Eltus-Plants whilst learning through trial and error, though they were severely lacking the technologies necessary to deal with and step into the depths of Talyxian-Plants during these days. All the places they had surveyed and hoped for were tried and had brought no results, only the Lyvank Mountains could harbor a sustainable environment for the „Green-Plants” as a result.

Thereafter, Eastern people have tried to protect the Lyvank Mountains’ alpine plants during the year 16 of the Rain Calendar due to the expanded Shigu Clan. They were performing a defensive stance in relation to the lands and plants, in addition to the usual operation and maintenance for plant care. The Easterners had resorted to tactics such as staging a huge war spanning across the Mutz-z Desert all the way to the neighborhood of Thekan, in order to draw the attention of the Shigu from the Lyvank Mountains, a fact only revealed in recent days.

Unfortunately, all of the Reono lands were conquered by the Shigu Kingdom by the year 28 of the Rain Calendar, therefore the Lyvank Mountain's precious alpine plant areas were included under their dominion, all the efforts put forward by the Easterners so far were in vain. The silver lining here, however, was the fact that the Shigu were paying attention to Western lands and Gold Ring at that time, thus the Lyvank Mountains and Alpine plant areas received little to no damage until the war ended.