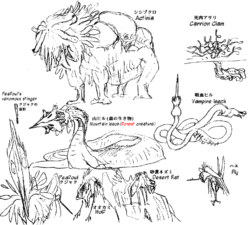 This article describe a common features of any and all creatures and flora native to the Planet Tal. While all Talyxians can arguable be classified as "primitive," we will assign this term to the more wild species, rather than the sapient ones, like Talyxian Stalkers and Rooters.

Most of these creatures are not humanoid, often appearing in forms considered to be monstrous: the horrendous mollusk-like Dondokos similar to land octopuses, the Forest Leeches with powerful invertebrate bodies and hungry jaws, the insect bodies of the pesky Weasel. While many Talyxians hold forms of a nightmare quality, there are also more gentle-looking types that have been domesticated as livestock, though these still look rather strange when compared to the Earth equivalent beasts. 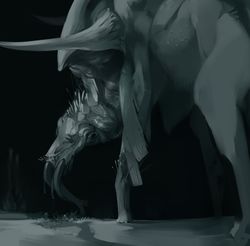 Canon version of a buffalo on Tal, a.k.a Shellfish buffalo.

The majority of these wild Talyxians are classified in the "Shellfish" family (conchology), bearing a hard shell exterior somewhere on their bodies.

Many of these Talyxians pose a threat or inconvenience to the sentient races, especially the ‎Eltus, but taming and domesticating some of them is possible.

Note: This article is completed but is still in need of revisions, mainly proof-reading.

In general usage, the phrase "primitive creatures" refers to animals that existed in primeval forests and early periods of time. This is only partially true when we use this term in the Vilous universe. All creatures that lived on the planet Tal before any Eltus races appeared are classified under this term "primitive creatures", having originated from an earlier time than the Eltus are involved in. This umbrella term overlaps with the common label of Talyxian. 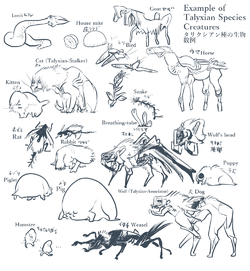 Creatures which are classified in talyxian species.

Some feral animals that are more Talyxian in appearance may show a lessening of the inorganic features, changing to a shellfish nature, when they are successfully tamed by people. There may be some correlations beyond the species division, but this is currently unexplored.

When using the word in spoken language, the term "Talyxian" generally refers to the race of a measurable sentient species, such as the Talyxian rooter. The term "Shellfish" is used for the docile, harmless, or useful animals that offer convenience or entertainment to Eltus people. These words are not used in a particular definition in regards to biology terms, especially since Tal's biology is not clearly defined into separate groups, like animals and plants.

A one of Tal's primitive creatures, a shellfish creature.

Primitive creatures have unique particularities that are obviously different from the Eltus and common creatures of Earth. As an example, some of these creatures feature other genders than the simple binary female and male, sometimes up to four different genders. These genders may change based on environment, and common Talyxian genes allow cohabitation and cross-breeding. This can allow for the mixing of different genes and traits regardless of appearance and apparent ecology.

Some primitive creatures in the northern regions of Tal are able to emit a strong miasma effect, but details remain unknown about how many and which particular types are able to do this.

Relations with the Eltus people 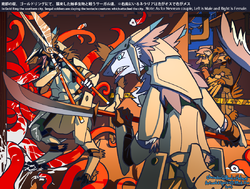 In Gold Ring the Southern city, sergal soldiers are fighting tentacle creatures that are attacking the city. :Note: The nevrean couple is male (left) and female (right).

A sergal is fighting off Tal's Weasels. You can see full sized version on Mick's Patreon.

The majority of the feral Talyxians are harmful and dangerous to sentient races. There has been a wide variety of methods to cope with, flee from, and/or fight them off, especially differing by region. In modern times, common people are able to utilize these creatures as a source of materials to trade and development industries, thanks to hunting technological advances, rather than simply holding off and repulsing such creatures.

Creatures classified in Talyxian species tend to avoid salts. The exact biological reason for this adverse preference is unknown, but awareness of this has allowed Eltus people to use salts as safety protection against harmful talyxian creatures. This is displayed in two moments in the Vilous comics: the "salt outpost" on page 4 of "Gathering Herbs", as well as the creature handlers using a hose of salt water on page 3 of "At the Festival" chapter.

The Talyxian creatures in the mountain and desert zones typically do not pose as much danger to the Eltus. The forest region holds the more dangerous and ferocious creatures, making it a risky venture to visit without armed guards. In the city suburbs in the forest regions, people will typically take a vehicle or horse as transportation and hire bodyguards. It is a very popular job to be a bodyguard or mercenary, especially around the tourist sites and areas close to caravan paths. Local hunters, guards, and bandits are usually knowledgeable of the nearby wildlife and serve as guides, hired at lower rates than true bodyguards. Sergals have a superior ability for coping with primitive creatures, in regards to the Eltus races. 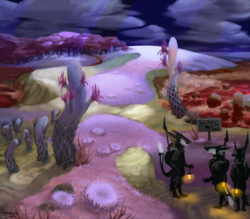 The common "plants" of Tal do fall under the classification of "primitive creatures". They are usually in the category of sessile organisms similar to barnacles, family actiniidae, sponges, or basket stars. Most of these species are classified under Talyxian-Plants. Such plants do not typically use chlorophyl, and their forms are entirely different from Earth's common plantlife.

There are green plants with chlorophyl molecules, however these are strictly Eltus-Plants, and not Tal's original flora. They are a rarity and are regarded as a desirable and valued item. Further information may be found at the Eltus plant page. 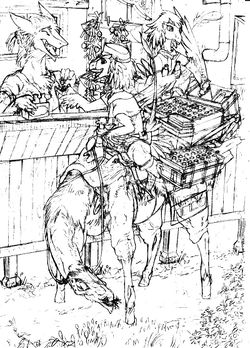 Female Nevrean is riding on the Talyxian horse, and selling milk that is produced from shellfish cow.

]] There is a variety of domesticated animals on Tal, with most of these animals (mainly quadruped herbivores like cows, horses, pigs, and sheep) falling into the shellfish category. Shellfish species are generally docile, posing no harms to sentient races. People can easily tame these animals and are able to perform selective breeding. Most of these species are able to be ridden as mounts, if their size is large enough. However, if such animals lose their owner or are left without civilized habitation, they can easily become feral and lose all docile behavior.

Such domesticated animals have a tasty quality to their meat and the ready access to this is a major benefit to raising them as livestock. There also is a "shellfish milk" harvested from the cow-type animal. This is a popular animal product for Southern dairy farmers.

Cows, bulls, and horses are usually classified as "Shellfish", but there are other domesticated animals that are not shellfish species; chickens, birds, dogs, and some feral animals showing Talyxian nature. Such animals have varying physical features, for example there are very long-legged animals, legless animals, and small bipedal animals, all able to be domesticated as livestock and household pets.

There is a variety of creatures found in the desert zones like Sailzane. Compared to grasslands or woods, very few living organisms populate the desert and among them can be found huge and monstrous creatures, such as "carrion clams", sand worms, small leeches, "little-finger shellfishes", and dondokos desert subspecies. See also:Tal's Wildlife.

As common features, those desert creatures are generally not directly hostile to Eltus people, apart from dondokos. A small animal that is familiar and friendly to Gold Ring citizens like hamsters have originated from Sailzane desert as well. However, there's still sometimes cases that indirectly cause trouble by their behavior like sand worm's case.

Almost all of those creatures are classified as Talyxian, but are similar to the Eltus species of the shellfish nature and have biology that protects them from drying out and salt exposure. Many other Talyxian creatures living in the desert seem to share this similarity.

There's few natural enemies for each them, but because food is scarce, their populations are generally small in number and spread out.