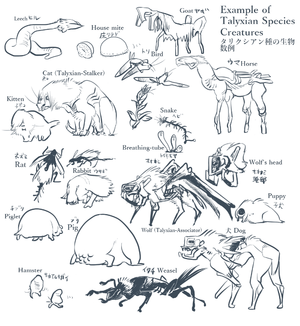 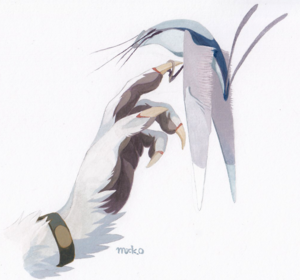 One of common bird in Tal. This is one kind of talyxian creatures.

Talyxians (タリクシアン Tarikushian) are the species group of creatures that include plants consisting of plural kinds; "Talyxian creatures". They are native species of Tal. Most of them have the appearances that mixed organic creatures and inorganic components, and have gray blood or gray core. They have mechanical-like appearances, though they are absolutely not machine, cyborg, or robot beings.

There are well known two classifications of them, Talyxian-Rooters and Talyxian-Stalkers. But, not only this. There are a lot of kinds of creatures which are classified in talyxian species. Also strange plants without chlorophyll which occupy most of a whole of Tal are classified under the talyxian creatures, Talyxian-Plants.

In biology of Vilous creatures, Talyxian species group are classified under the Tal's primitive creatures, and are totally different from the Eltus race definitely. They have very unique particularities on their biology that are obviously different from Eltus and common creatures of Earth. Some examples, rooters don't eat any foods and can't reproduce in the same way as common creatures, stalkers may change their gender according to growth. 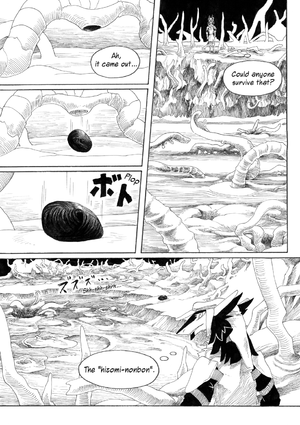 All of talyxian species creatures avoid salts for some reason. Hence Eltus people use salts as safety protection against harmful talyxian creatures, in many areas. Some harmful talyxian creatures will eat Eltus people, in such case, they will excrete salts while are taking long time. Such excrement is wrapped by the black matter that have rubber-like hard quality. It will be shown as completely a lump of black thing when those are excreted. And there are unalloyed crystal of the salt in center of those. Those things are called by various names according to each regions, "Hizomi", "Nonbon", etc... Eltus people use those things for the magic rituals. If they took something that have highly-concentrated salt, they may wrap a whole of it without digestion. Actually salts are not harmful for them on biological feature, although they avoid salt with unknown reasons.

Important note: This article have only modern information. Old history and canon went to "History of Vilous Development" article.

There are a lot of creatures that belong to Talyxian in Tal.