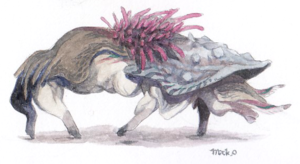 Common Snail Cows (JP: マイウシガイ) are one kind of a creature that is treated as mere "cattle" by folks, stemming from the Talyxian organism group.

These Common Snail Cows are harmless to the Eltus people and are known to have a good taste. Due to this, they are a popular livestock choice within Gold Ring. Their domestic counterparts have no shell, as they have passed through the improvement of their breed in order for their meat to be harvested and processed easier.

If they are given an adequate amount of feed, and grow healthily, they will reach similar sizes to that of common cows on Earth. People can even ride on those that have reached such a size.