Difference between revisions of "Vilous" 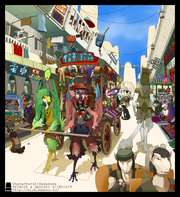 Somewhere in Gold Ring, the greatest city of planet Tal. 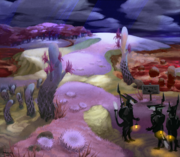 Sergals in Thekan the Talyxian-Plants area, can see many heterogeneous plants that are common plants in Tal.

Primary species in Vilous are divided into two broad groups: Eltus and Talyxians. The most well known species from Vilous universe, Sergals, belong to the Eltus race group. An outlook on the scene of Vilous is considerably different from Earth. Strange plants without chlorophyll occupy most of the planet Tal, demonstrating its unusual characteristics. There are animals on Tal that are peculiarly different as well from Earth's animals although they may share the same name.

If you want to know the primary things...
About Terminology
About Places, Areas, and Those Culture
About Creatures, Races, Species
About Foods, Dishes
About Chronology in Canon Story


Important note: In New Age, there is a possibility the name of planet Tal will change to "planet Vilous". This would mean that Vilous returns to a planet similar to the Old Age and Tal would become extinct. But that hasn't been decided yet.