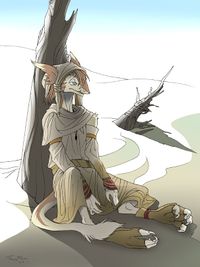 Before the founding of Gold Ring, most southern sergels lived an impoverished lifestyle due to the scarcity of food and other natural resources. They have since forged a strong cultural and technological relationship with the Agudners having cohabited with them since earlier times.

Main article for common features of all Sergals

Their ears are long compared to northerners and the overall thickness of their fur is less. Their mane and heel fur is also shorter in comparison to northerners. Their average height is shorter and their physique slimmer, their legs and arms are also somewhat more slender.

Their primary fur colors are warmer shades such as brown, beige, blonde and orange. In addition, they may also choose to dye their fur in flashy, vivid, exotic colors like red, pink, and so on. Thus, there are multifarious color patterns via postnatal fur-dyeing. 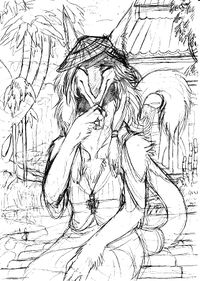 Southern Sergal culture is almost the antithesis of the primitive northerners. They place far greater value on culture and technology, as well as their social integration with other Eltus races such as the Agudners. This trend is strongest for those living in the more civilised and developed urban areas such as Gold Ring.

The pursuit of culture and fashion is popular, unlike northern Sergals, female southerners are more likely to express their femininity in their choice of clothing thanks to the influence of the Agudners. Also there are fur-dyeing as popular fashion to get more various color patterns. 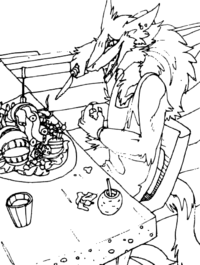 Sergal eats :Note: This sergal maybe near to eastern. But there are such cultural meal manners in both of south and east.

They are completely omnivorous, fish being their preferred source of protein, supplemented with plenty of vegetable protein. They have developed a culture of cooking that has led to a far wider variation in cuisine than that of the northerners. Their diet may also include some species of invertebrates such as shrimps, but they will draw the line at eating the creepier insects unlike the Nevreans.

Those who wish to consider themselves especially cultured will favour cooked cuisine whenever possible, and attempt to eat using utensils like knives because swallowing food whole is considered by them to be "uncivilised". They may attempt to chew their food, but their jaw structure and lack of molars makes this ineffective.

Southern Sergals are raised among Agudners since birth, so they learn the same language. Animalistic crying is only used in very private situations, while drunk or as an infant's first communications.

The aristocratic Sergals of central Gold Ring have kept their traditional brown fur and small build due to inbreeding and incest among aristocratic families. 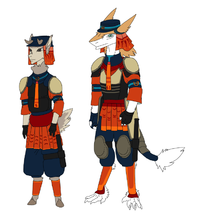 Sergals have generally enjoyed a good relationship with the Agudners, especially in the south. The symbiotic relationship between the two races, with Sergals providing labour and protection for the Agudner, who in turn would provide Sergals with advanced technology, led to the advancement of both civilisations, and the construction of Gold Ring would not have been possible without this bond.

::Note:: This page needs to be proofread.