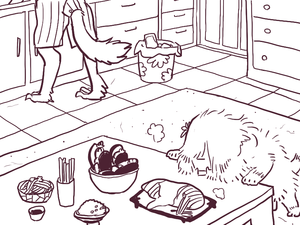 Mr. Yaji preparing his dinner, and Mowamowa waiting and seeing it. There are various kind of ingredients, Talyxian and Eltus mixed.

This article describes common ingredients that can be found on Planet Tal.

Edible creatures that fall under the Talyxian organism group are generally the major option for foods in Planet Tal. However, because what is edible one out of Talyxians greatly depends on species and classification, people need to have correct knowledge of creatures to choose or process Talyxian creatures for foods.

Secretory fluid out of Talyxian snail cows and goats called "shellfish milk" or "snail milk" is the most common dairy products.

Edible animals and plants that fall under the Eltus organism group, are very few in number, rare and precious options on Planet Tal, and can be got in very limited places. As all Eltus organisms do, they also have similar appearances and biology to creatures on Earth.

In the sense of Eltus folks, every ingredient originated from edible creatures that fall under the Eltus organism group are considered as the highest grade of food for the Eltus people. Eltus fishes, Eltus rice, and a part of seaweeds that are farmed in Salt Lake ColVilous are representative and popular Eltus ingredients as they have kept a quite amount at a feasible level for mass consumption. However, as their production area is virtually limited to Gold Ring, folks in other regions need to transact through trade merchandise in order to get them.

Currently, aquatic creatures that live in Salt Lake ColVilous are confirmed to exist. Fish, crabs, squids, and shellfish. Eltus shrimps have already been brought to extinction, and the presence of Eltus octopus is still unknown.