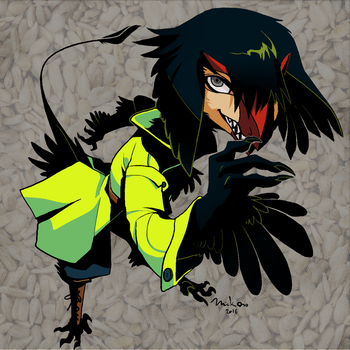 She is a female Nevrean and has black feathers and a red bill and horns. She is considered to usually hide her face with a mask and goggles when she appears in public.

She is rumored to appear frequently in the neighborhood or a realm within Gold Ring nation, however, every eyewitness testimony that suggests her appearance is strictly not proved as that of herself.

Any information with regard to her, birthplace, parentage, occupation, affiliation, and present situation, all of those are encased in a mysterious veil. There are various rumors and theories related to her biography and activities, however, nobody knows her true background and identity. There are various reports about her as well, however, all of those are still not clear whether those are true or not. As those have quite unfounded and uncertain nature, there is even a theory that those reports are not about Yun Yagili herself in reality.

In common theories surrounding her, there are the below reports:

However, still, all of those theories are not firmly confirmed as truth.

As one of the noticeable rumors, there is a rumor that he has some kind of secret relationship with Quu, however, this is not strictly identified nor proven, as a lot of matters related to personal relationships surrounding Yun are shrouded in a dark sense of mystery.