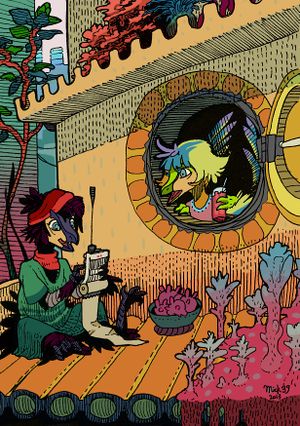 A pair of urban Nevreans who are living in the modern era of Gold Ring. The female is paying attention to an email with her portable fax, while the male talks to her from a window.

Urban Nevrean (都会ネウリア) is a term that refers to Nevreans who live in civilized regions such as Gold Ring.

They have begun from refugees who took refuge toward Gold Ring from the Nevrea region during the genocide and invasion in western lands by General Rain and her Shigu armies, approx the year 33 in Rain-Calendar.

Due to great differences in the social and cultural environment, their culture and behaviors have become totally different styles from what Native Nevreans have.

Their integration with Gold Ring was much newer than Sergals and Agudners, due to this, they have passed the unfair treatment and social problems that include racial discrimination.

Main article for common features of all Nevreans

Nevreans are not a native race to Gold Ring, their history as residents of Gold Ring is much newer when compared to that of Sergals and Agudners, native, founding races of the nation. Due to this, Nevreans were not having complete 'human rights' under the GR laws because the laws were considered and prepared only for the GR native races, Sergals and Agudners.

From the time in which Nevreans had immigrated into Gold Ring after the year 33 in Rain-Calendar, they had passed through a heavily difficult life, undergoing big racial discrimination from native residents within the nation all the way up until RC70. Racial treatment for Nevreans was very unfair, merciless and they had suffered downright direful things for a long time, to the point of downplaying their own life, even.

Actually, people in Gold Ring had already seen Nevreans prior to RC33, as Gold Ring held friendly relations with the Western region, Vetla, up until the beginning of the Great War with General Rain and the Shigu. The people of the Western Musical troupe were limited to only visiting Gold Ring once every two to three years, in order to provide a performance in the greatest festival in Gold Ring. A part of this history is expressed in the Vilous Manga, Episode 3, At the Festival.

However, during this time period, Nevreans were known throughout Gold Ring as simply "beautiful people whom visit the city during special events." In essence, it just meant that the people of Gold Ring knew little to nothing about Nevreans beyond what they could see and gander from their theatrics programs.

Due to Nevreans originating from the exclusionary and isolated homeland, they have their own culture and tradition which is by far, vastly different from that of Sergals and Agudners. After they had immigrated and begun to live out life within Gold Ring, a big problem had started to materialize between native residents within the city, due to the deep differences in the social and cultural environment.

This background story of the above artwork serves to explain the manner in which Nevreans had been treated during that time, and how Gold Ring's people viewed them. The people of Gold Ring had treated and judged all Nevreans in a stereotypical manner, alongside their own bad preconceptions and prejudice. At first glance, the two might look like a couple, but they are actually not.

Both of them had committed some sort of crime, independently of one another, and the people thought they must have been related to each other. Despite the fact that they actually have no type of personal relationship between themselves, people did not trust their excuse and jailed them together after having them judged as accomplices.

Alongside that, the above artwork even displays how gender differences reflect behavior in Nevreans. Males are more prone to show their emotions and feelings, they do not usually try to hide how they feel or think. In contrast to this, females will always present a neutral, impassive expression in order to hide what they feel or think in a taciturn manner.

These great contrasting differences in genders were very new to the people of Gold Ring. As a result, it had even reached the point where it increased the unfair treatment against Nevreans, as Gold Ring people had difficulty understanding these differences and were confused by them.

There were quite a lot of Nevreans who fell quickly into carrying out improper activities such as theft and fraud, due to a difficult life marred by poverty and unfair treatment. Because of this, there was unilateral suspicion and distrust built against Nevreans, such as the one presented in the artwork.

Nevreans had gained human rights lawfully in RC70, thus finally joining the ranks of Agudners and Sergals alike as the third race of Gold Ring. In addition, their progenies born within a new generation has grown up in Gold Ring and its environment from the beginning. They will still more or less keep to their own predisposition as a racial feature, but they are much more readily able to blend into the lifestyle among the native races of Gold Ring when compared to their parental predecessors and what they experienced.

Due to these reasons, and all the way up to the modern era's present day, mistrust and suspicion against Nevreans has been dwindling down steadily over time, as opposed to pre 70RC times when they had little to no rights.

Most of the jobs in Gold Ring were originally considered and prepared only for the native races in Gold Ring, Sergals and Agudners. Because of this, there were very few options for Nevreans, which they can have priority. Nevreans who do not excel in their skills or beauty were quite difficult to find fulfilling work.

Females will most often find work as construction/scaffold workers, guards or crafters, and metalworkers. Males will typically find work that takes advantage of their appearances such as hospitality, merchants, and light manual labor. As there was a small demand for Nevrean workers, their earning opportunities were quite limited.

Many females who ware not able to find honest work fall into banditry and those without a legitimate job are often treated as scoundrels. And as such, they faced prejudice and mistrust from the other Eltus races, Sergals and Agundners. They discredited the reputation of the Nevrean race as a whole. These trends had led to one of the reasons for the big racial discrimination against all of the urban Nevreans in the Gold Ring after the war.

Many traditions of the natives of the Nevrea have been lost over the generations that have settled in Gold Ring, and customs such as the wing cutting ceremony have been lost.

From the first moment when they had immigrated over to the nation, they were easily welcomed and got good treatment from Gold Ring native residents due to their nature and traits, cute, beautiful, and hilarious.

In the early stages that the immigrated males had begun to find occupation in the Gold Ring, the easiest field to get themselves into was the service industry due to their natural features, amiable and sociable behaviors as well as their beautiful appearance. And some males made use of makeup and showy behavior in order to stand out, especially merchants or those in the hospitality or sex trade. Most of the Nevrean sex workers are composed of males, and most often sought by male Sergals.

Males that have turned to prostitution to make ends meet were selling their bodies to others regardless of race or gender and devaluing their own beauty in the process, due to this, they can be said to be a shame to the Nevrean race. Because originally their sexual intercourse is strictly carried out for the only serious reproductive purpose, and every behavior and expression from romance related to males beauty had been kept as clean and platonic manner due to their traditional cultural sense. However, many urban Nevreans became no longer follow those of their traditional rules due to the environment and social differences. Those prostitute males lost their original poetic sense that had been filled with various spiritual and platonic ways, and instead of it, almost all of them began to produce the erotic songs that praise lewd behavior in a similar style for satisfying their customer Gold Ring residents. As result, these changes gave a more bad influence on their females' mental state because females had valued their original sense and style, and were hard to accept those new style songs. Those situations and trends will change after the founded of Sabi no Wa. (Described later)

If they can find an occupation that they do not need to rely on their appearance, they are good at being a designer, artist, musician, actor, comedian, general entertainer, commentator, spokesman, and staff working in the advertising business, due to their superior aesthetic sense, communicative competence, and speaking skills with a rich vocabulary and flexible linguistic skills.

They have passed a very bitter life with many discrimination and prejudice, unlike males.

Unlike males, female sex workers are much rarer due to their rugged appearance and potentially dangerous talons. If anything, females are rather the side who buy the services of male Nevrean prostitutes.

Normally, they are good at bank clerks, guards, and lawyers with their secretive nature. But as their trust was low and because they lack amiable, it was still difficult to get important jobs.

In the Gold Ring nation, making a pen with their own flight feathers has become common behavior as a new culture for urban females instead of their traditional and native culture that makes an arrow with the flight feathers which females cut off in the coming-of-age ceremony. In short, the "feather pen" in the Gold Ring becomes an equivalent item to an arrow in the Nevrea. It has become a common scene that people can see a very big pen made with their flight feathers in a house of female Nevreans in the city. They would continue keeping it carefully all the time. This became one of the opportunities that urban female Nevreans make relations of the affinity with Sergals and Agudners.

Sabi no Wa (錆の輪, literally means "The Ring of The Rust") is the name of a progressive group or movement for all urban Nevreans of a new generation, intended to build the new Nevrean culture in Gold Ring.

They have begun to develop and incorporate electronic music into their musical culture. Female youths may dye their feathers into vivid hues, and males may carry weapons to develop their self-defense ability. While it does not mean to realize a complete gender role reversal, the disparity in genders is definitely beginning to fade. Females have been involved in the development of flight and communication technology, and males have taken more responsibility for their own protection by developing weapons such as lightweight weapons that suit their anatomy.

But after written words and typewriters spread among urban Nevreans, their styles had rapidly changed. The progress of technologies of print and the advertisement were related to this development as well.

As a result, urban Nevrean music has lyrics and musical scores, unlike Natives' music. And electronic music is the core of their genre.