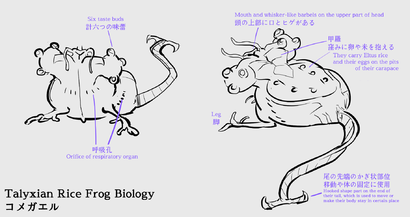 Biology of the Rice Frog

Rice Frogs (コメガエル) are a small-sized Talyxian creature which is said to be close to a Black or Gray type Talyxian, inhabiting the brackish water areas around Salt Lake ColVilous in flocks. Their size ranges from about 10cm(3 inches) to 20cm(~8inches), and they generally display dark bodies.

As most of Talyxian creatures generally display strong randomness in their appearance, shape, and form, this Rice Frog is also known as having some variations about their appearance. It is not an actual mutational species nor subspecies capable, however. All of them are biologically the same species and just show only minor differences in appearance.

This Rice Frog serves as an example that most of the Talyxians which live in places where a high concentration of salinity can be found, will display a mild nature as well as show strong Eltus traits. They are also thought to have less potential of incurring extreme mutation or variation which are specific to Talyxian organisms. Due to this, they have lower potential risk rates than Talyxian creatures inhabiting the Talyxian biome forest areas.

Rice Frogs usually live quietly and within a general fixed area, they are believed to be omnivorous, relying on medium plankton and carcasses of wildlife. Despite having a long history in relationship with Eltus people, many things of their biology and ecology have still not yet been elucidated.

They are known to have a symbiotic relationship which performs the collaborative, reproductive behavior with the Eltus rice plants during the breeding season. Their larva is born from their eggs, which have an identical appearance with the Eltus grain of rice. Their lifespan is still not determined, however, a Rice Frog which has assumed the seedbed role for Eltus rice, will eventually melt away and turn into mud, thus fulfilling their purpose.

Eltus rice simply does not possess the ability to blossom their flowers by their own means. They can make their seed with help from the Rice Frogs. On the same page, the Rice Frogs also does not feature a reproductive organ when they are in their mobile state or form.

Due to this, they will develop their flower when they perform collaborative reproduction, and it works as a form of shared genitalia for both Eltus rice plant and Talyxian Rice Frog. With this genitalia, they are able to create their own seeds safely.

This flower has a red and grotesque appearance, almost akin to a tumor. It closely resembles some of the Talyxian flowers found in Talyxian biome forests.

As these symbiotic behaviors displayed by Talyxian creatures may look like a form of fusing into a single organism from two different creatures, it may also be seen or considered akin to parasitizing at first glance, rather than a symbiotic relationship.

After blossoming ends, it will turn into a mature rice plant which has both rice grains and frog eggs mixed into the same rice bud. People will harvest this together. Both of the Eltus rice grains and Talyxian Frog’s eggs share an identical appearance, however, frog’s eggs are generally few in number when compared to rice.

Afterward, they will take a dive into the tidal mud, lying in wait for several months. The Eltus rice which these frogs nurse will grow sufficiently in time.

Before long, Eltus rice plants will sprout from the body of a Rice frog and will grow into a rice seedling. At this time, the Rice frog will lose their mobile anima-shaped form and will turn into a sessile form, which looks like a lump of mud. Through this process, the Rice Frog will assume a state which can be said to be that of a seedbed completely and literally.

At the same time, eggs of the Rice Frogs will be hatched on the back of their parent frog, or in the tidal flat where they fell from the rice plant, and thus, begin their life. The frogs that hatch from their parents back tend to grow larger than the individuals whom are born from a rice plant.

Eltus rice can blossom their flower only within this way. Even if there is a seed which has sprouted and grown with no passing through a Talyxian Rice Frog seedbed, it will not blossom and thus will not create the next generation’s rice. 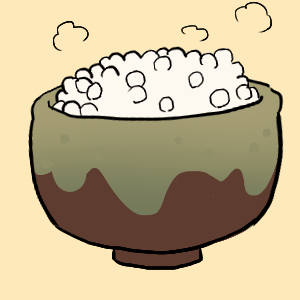 Because Eltus rice grains and Talyxian Rice Frog eggs have an identical appearance and both exist together within the same rice bud, it’s very difficult to distinguish them by their appearance.

Meanwhile, they have different weights, generally, rice grain is heavier than a frog egg. Due to this, people can separate them to some extent by putting them to float on water. However, this method isn’t perfect and will not be able to separate all the frog eggs from the rice completely. Therefore, some frog eggs are often mixed in among commercial rice.

Eltus people are not disturbed by mixed frog eggs in batches, because frog eggs also have a good taste. On the contrary, some may prefer to eat the frog eggs and consider them as a kind of bonus in the rice!

However, the consumption of frog eggs is not recommended nor encouraged, rather, frog eggs should be saved up as much as possible in order to help facilitate and repeat the cycle of rice cultivation. Separated frog eggs will be returned to the tidelands in cultivation areas for the next season.

Harvested rice does not require a “trial by fire” processing to eat. This proves that they keep a perfectly complete ecology cycle.

While Talyxian Rice Frogs are domesticated animals, still retaining some ability as wildlife, they can make the most of the improved rice sprout even if they are not under the specially managed and conditioned environments.

Talyxian Rice Frogs are a very known creature and familiar to Eltus children as they are often used for teaching material in Gold Ring tenement houses and schools as a sample specimen of animal husbandry and agriculture.