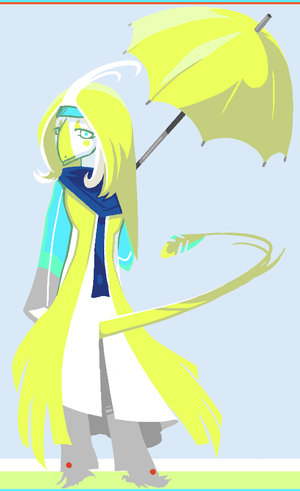 A full aspect of Quu's appearance

He is adorned with glittery lemon-yellow feathers and white, curly hair. He has a slender build and delicate physique, just like typical male Nevreans. Also, the lack of horns on him gives him a more streamlined appearance. (Note: It is still not determined strictly whether this feature is a specificity belonging to Quu solely, or is a common option that regular male Nevreans could have.)

Due to his good glib tongue, he often provides nice jokes which can make people laugh. Meanwhile, he is also adept at saying things that can and will offend people. This aspect originates from his deep, complex anxiety stemming from his fear of garnering an indifferent attitude from other people.

Even if his words may cause displeasure or negative feelings towards people, he ultimately takes up a result from getting a response or attention out of them.

However, after assuming the position as a symbolic representative of the nation of Gold Ring, and his name, therefore, becoming well known alongside the role he bears, he has virtually lost any and all opportunities to use these type of conversational abilities.

He is the first, official Judda in Gold Ring, after the nation of Gold Ring had enforced the Judda system. Due to this social position that he finds himself in, he is usually living on the high rise floor of the tower located within the central city part of Gold Ring, the heart of the nation itself.

He bears the role of a “wedge” instaurated in order to put a full stop on the ongoing confused situation within Gold Ring which had arisen since Nevreans immigrated into the nation. However, his aspirations and hopes are to rather become and take upon a more rustic appearance, spending a quiet and ordinary life. (His background story prior to him taking up the position of Judda, has not been determined just yet.)

He developed a good friendship with Jakk, and he often invites Jakk to his room and enjoys various interesting conversations that cover wide categories and genres.

There is a rumor that he has some kind of secret relationship with Yun Yagili, however, this is not strictly identified nor proven, as a lot of matters related to Yun are shrouded in a dark sense of mystery.