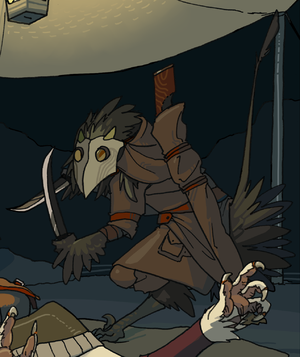 Female Nevrean robber belonging to the Out Ring organization.

Out Ring (アウトリング, Out Ring) is the bandits' organization that are mostly composed of Nevreans (mostly females) who have fallen out of regular society for various reasons. Membership of male Nevreans is very low. They generally cover their faces with masks or goggles.

In pre-war days, the term was used to describe desert people not belonging to Gold Ring's society, who were known for their primitive, feudal lifestyle. Following General Rain's incarceration in year 40 in Rain-Calendar after World War, many urban female Nevreans found themselves unable to find employment in the rapidly evolving postwar economy, and the Out Ring was founded by the disillusioned and the unemployed. Their influence has grown proportionally to the increase of male Nevrean prostitution in urban areas.

Female nevrean members of Out Ring who were caused from "losing one's male", they are a representative example of the "corrupted female". In concrete reasons, they might be unemployed (especially until year 70 in Rain-Calendar), sexually deviant or simply rebellious. An important contributing factor to membership in Out Ring is gender discrimination. Most of them suffered prejudice from other races in Gold Ring. See also: Racial treatment in Gold Ring - Urban Nevreans

They are feared and disliked in any areas where their existences are known, due to their cunning, bloodthirsty and malicious nature. Almost universally, society looks down on them as being unforgivable, irreconcilably lost, even heretical. They more increase the discriminatory prejudice "female nevreans are merciless, cruel, weird, and doubtful" among urban sergals and agudners. Hence they led to more convinced prejudice against a whole of female nevreans from other races.

They have tarnished the original peaceful reputation of the nevreans. They are valued as representative example of "corrupted female" in culture of Native Nevreans, all of native females try to evade it as worst situation.

Some fringe groups operate like a religious cult, brainwashing vulnerable youths to serve as combatants in their ranks.

Many female nevrean members fear their male counterparts for various reasons. Due to the influence of Judda in central area of Gold Ring, Out Ring cannot operate there. Judda form and those who practice it instill fear into Out Ring members for religious reasons, as the presence of Judda in a region is enough to quell social unrest from a variety of different sources.

Originally, the "bandit female nevrean" is the fate for corrupted females who lost one's male that had to be protected. Then, if someone of them got again beloved male, other members will kill or awfully injure its male due to jealousy. All of female members always have a guess and very worry about such case. Then, the "contact with male" is generally taboo in their tacit agreement. Hence as for the case of "male member", they will attune oneself to them without the "identity of regular male nevrean" (later mentioned).

Because most of Out Ring's members are female Nevreans, they behave like a pack of female prisoners. They create informal groups and cliques amongst themselves, usually for personal enrichment rather than out of friendship. They often mistrust one another, fight over the spoils and bully or sexually torment more fragile members of their group.

Male nevreans are generally unwelcome in their group by some reason, though there are exceptions. However, male nevrean members maybe show a muted or dull color scheme like that of females, and behave like females.

The situation in present day

In present day, male nevreans members and other race members will increase. Then the common knowledge "bandits are female nevreans" will change.