Lyuca (リュカ) is a pure Northern Sergal born 3 years before Rain Silves herself and was part of the Sieg people before joining Shigu.

Lyuca is a pure Northern Sergal, albeit sporting a more fluffier coat. His underbelly fur is colored white and the overall coat is of a light grey, while his eyes shine blue with a tint of red surrounding. In addition, a red tattoo is found upon his legs, signifying his loyalty to Rain Silves. Lyuca does not appear to wear clothes commonly and is adept at handling most biological creatures bare-handed. 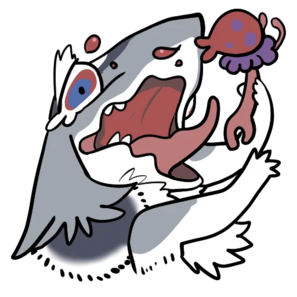 Born 3 years before Rain Silves herself, within the confines of the Sieg people, who were still primitive at the time and communicating through yips and yaps, Lyuca did not actually have his own name.

From a young age, Lyuca would lose most of his sight while severely injuring his legs due to constantly experimenting with plant poison. Despite suffering such severe maluses, Lyuca would never stop touching and inspecting Talyxian plants and animals throughout the remainder of his life. Lyuca was actually born into one of the clans which were shortly after united into the Shigu Kingdom by Rain Silves.

During this clan unification, Lyuca would meet Bergt and the two would quickly become friends thanks to their shared passion for Rain. Under her command, Lyuca would serve to work as a scientist at the facility which would later be known as the Shigu Royal Biome Laboratories. This in turn, would set him well away and apart from Bergt, who became a soldier, but such was Lyuca’s extraordinary ability to handle unique vegetation, that even after the fall of Rain, he would continue to earn marked success and distinguish himself.

Lyuca is a very easy-going, friendly Sergal. Though being primitive in nature due to his upbringing, he is enthusiastic and enjoyable to be around. Many do not mind his presence, despite his near blindness, as it makes it actually easier for people to be comfortable in his midst. He is rather light-spirited, and carries an immense amount of joy within his small frame.