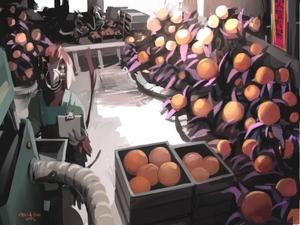 A farm and processing plant of Fire Loquats in the modern Gold Ring. Due to the high flammability of the fruits, any kind of open flame is strongly prohibited there. 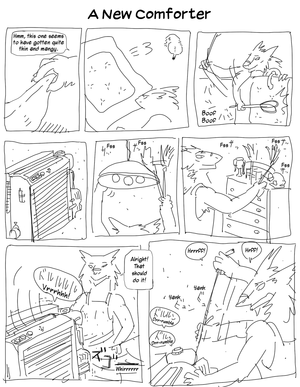 A comic page from the Daily life of Gold Ring series, Mr. Yaji is using an engine-powered apparatus which runs on gasoline fuel made out of the Fire Loquats.

They possess purple leaves as many Talyxian plants do, and they grow large-sized, rounded, orange fruits akin to those of citrus species but their size is approximately comparable to that of middle-sized melons.

As the alias "Oil Loquats" means, their fruit is known for containing plenty amount of flammable oil. The oil is used as fuel for farming equipment, vehicle, and other machines.

In the fandom, this plant and the fruit may sometimes be considered as an available material for firearms, however, it cannot be compared or said to be a source for gunpowder. Due to the Fire Loquat's composition functioning akin to that of engine oil, it is a totally different element from gunpowder.

The name "Loquat" is originated from the evergreen eastern Asian plant that has an identical name, it also grows a small orange acidic fruit cultivated in subtropical regions both for its fruit and as an ornamental.