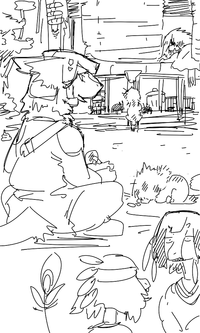 This is the period before Mowamowa meets Mr. Yaji, when she was living as merely a local and feral cat in the city. There are female nevreans that are talking nearby, and an unnamed sergal is feeding Mowamowa and the other local cats. 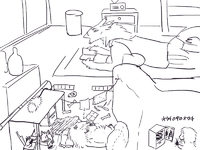 Mr. Yaji and Mowamowa in their house.

Daily life of Gold Ring is a comic following various stories in the modern era (around 70's on the Rain Calendar) Gold Ring, including the daily life of Mr. Yaji the Eastern sergal and the young female Talyxian-Stalker named Fuwafuwa (actual name is Mowamowa), and everything surrounding of them. Because their timeline is after the great war with General Rain Silves and is considered the modern times, almost everything is peaceful with no painful stories that are often seen in other Vilous settings.

These comics were created around 2014 and released on Mick Ono's twitter, as her personal fun doodles. Thus, the visual information might not be strict and current canon.

Before Mowamowa met Mr. Yaji, she lived a pretty harsh life. She was sometimes bullied by local sergal brats and was occasionally bothered by two local male stalkers, named "Boor" and "Cap". (As their names show, the stalker bearing a hat is named "Cap".) Boor and Cap were very insistent, harassing and pressuring her. Despite Mowamowa’s refusals, they often tried to forcibly mate with her. However, in the story's beginning, they are interrupted by Mr. Yaji, and so begins a much kinder life for Mowamowa. As Mowamowa does not reveal her name, Mr. Yaji calls her “Fuwafuwa”, which means ‘fluff’.

One day, Mr. Yaji is petting Mowamowa as usual. However, he finds a strange scab on her right foreleg.

In the past, Yaji worked in the Primitive creatures measures branch office.
But he was self-conscious and eager to show off when he was young, and he came to have his left foot numbed by the paralytic poison of a tentacle-creature that he handled carelessly.
This came to reflect badly on his work, so he changed his job, becoming a common guard.