From Vilous
(Redirected from Cracked)
Jump to: navigation, search

Mowamowa (モワモワ) is the name of a Talyxian-Stalker character in the New Age, appeared on Daily life of Gold Ring comic series. 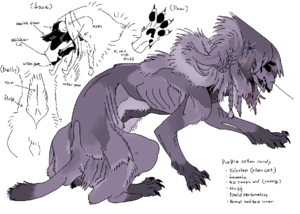 She has purple fur and fine mane. Tips of her legs and tail show deeper purple. She has a single eye which forms a circle-shaped, but it is usually covered up with hair. There's a poisonous sting in the tip of her tongue. She has antenna-like whiskers, like those of an insect, on her cheekbones.

She has the good ability as a feral animal, as she shows good result in a rat hunting.

When she feels uncomfortable and becomes to be emotional, issuing her unique and characteristic "kfff" hiss to signal her displeasure.

Her personality is quiet, timid, and quite taciturn. She rarely talks in human's words, usually, she only expresses her emotions with her unique and characteristic animalish cries if anything.

A lot of her behavior can be said as very typical feral Talyxian-Stalkers ecology, she seems to focus on having unrestrained life just as 'cat', rather than behave as 'human' like.

Before Mowamowa met Mr. Yaji, she lived a pretty harsh life. She was sometimes bullied by local sergal brats and was occasionally bothered by two local male stalkers, named "Boor" and "Cap". Boor and Cap were very insistent, harassing and pressuring her. Despite Mowamowa’s refusals, they often tried to forcibly mate with her. However this time, they were interrupted by Mr. Yaji, and so began a much kinder life for Mowamowa.

As Mowamowa did not reveal her name, Mr. Yaji calls her “Fuwafuwa”, which means ‘fluff’.