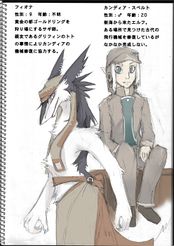 (from left to right) Fiona and Svelte in the Blue chapter.

This is an untranslated part of Mick's original World of Vilous novella. Some chapter is translated into English by fans, but note that they are not admitted as the official translation.

In this Wiki, shows only chapter titles and synopsizes.

Svelte came to the city of Gold Ring to make money for restoring an "ancient flying machine". As a Judda he is 20 years old but still a child, however, he doesn't want to be treated as one.

Aar is a priest of the Midori Flame and father of Toto. He's worried about Candia's "flying machines", because he thinks they might be an insult to the sacred sky.

Toto is the daughter of Aar. She refuses to succeed him as priest of the Midori Flame.

Fiona is a fraudster who lives in the city of Gold Ring.

Vanku is a priest of the Midori Flame.

Erin is a younger sister of Vanku. She enjoys collecting minerals.