Yung Yagili (矢桐ゆん), also known by her nickname Yun-Yung (ゆん=ゆん) is a female Nevrean character from the New Age. Her name was originally "Dot" when she first appeared, but was later replaced with her current name.

Yung Yagili originally had long, slender, bird-like legs, but these have been updated to follow the New Age Nevrean canon. Thus she now has raptor-like legs similar to the ones a Deinonychus would have.

Yung Yagili is a female Nevrean and has black feathers and a red bill and horn. She usually covers her face with a mask and goggles.

She appears frequently in the neighborhood of Gold Ring city, but information on her birth, parentage, and current position are all unknown.

Some people spread rumors about her:

"She does not belong to the group — she acts alone, planning thieving and rebellion activities."
"She belongs to the promotion group Sabi no Wa (which Nevreans youths gather around) of the Gold Ring city by anonymity, and engages in music activity."

Even as various rumors fly, nobody knows her true background and identity. There are also various reports about her. However, it is not clear weather they are true, or if they're even about Yung Yagili or someone else.

Much of her personality is a mystery. She is rumored to be a cruel person with a foul mouth, a cowardly demeanor, and possibly even masochistic — though some say that she can be unexpectedly caring. She is suspected to be the founder of Sabi no Wa, the new-wave Nevrean movement in Gold Ring, but her true involvement is unknown. She is said to have the potential for great ambition and achievements, even though she herself may not be aware of it.

Quu, the male Nevrean, is an old friend of hers. 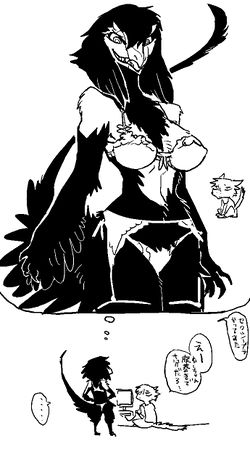 Yung and Jakk as her brother

Note: This setting was made by Mick39, but this belongs to Non-Canon now.

Symbolically, Yun-Yung represents the "Elder Sister" of a "Family" of sorts. Rain would be the "Terrible Mother" and Jakk the "Younger Brother." Yun-Yung and Rain Silves are fateful enemies.
She appears to be a great marksman, very skilled with a bolt-action rifle, and has access to some high-tech equipment like her visor.
She is a narcissistic, sarcastic person with a foul mouth, masochist on top of that and is described as a cowardly, self-centered being, who, though also happens to be a skilled engineer.