Bergt (ベルクト) is a pure Northern Sergal born in the first year of the Rain Calendar. His birthplace is the Shigu Kingdom. 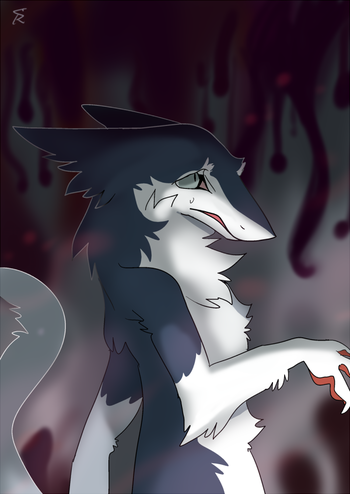 Bergt, is afraid of something.

As a pure Northern Sergal, Bergt’s underbelly fur is white and his coat is that of a more dark grey, his eyes also bear a more common grey, typical of the North. He also sports a red tattoo signifying his loyalty to Rain, though where it is located is unknown at the moment.

Bergt actually wears armor for the most part due to his role as protector and soldier, displaying a typical armored Sergal attire and look to himself.

Bergt was born only one year after the birth of Rain Silves herself. In a similar fashion to Lyuca, he was born amongst the Sieg people without a readily discernible gender, though he was part of a different clan from that of Lyuca’s. Eventually, due to his primitive Northern origins, he would end growing up completely enamored by Rain Silves.

When the clans were united into the Shigu Kingdom, Bergt would meet Lyuca and the two’s shared passion for Rain allowed for a friendship to bloom quickly. However, in his drive to honor Rain, Bergt would head down the separate path of being a soldier, joining the Shigu army.

During his service, he would personally kill many Reono people alongside Rain, in an attempt to impress her, but in doing so, he eventually would come to see a side of her which horrified him. He would bear witness to a moment in which Rain had eaten a child, such an act instantly splintering his loyalties, causing him to flee the Shigu Kingdom. What happened to him after this, though, is completely unknown to anyone outside of himself.

Bergt is actually a very easily frightened individual on the inside and would flee at the first opportunity. However, he does not let such feelings project themselves outwards, for he does not want others to know of his fear. Thus, he displays a far more serious, dedicated personality towards other people around him in order to hide his shortcomings. He does his best not to waver, and as such, he is able to suppress his own fear quite well.