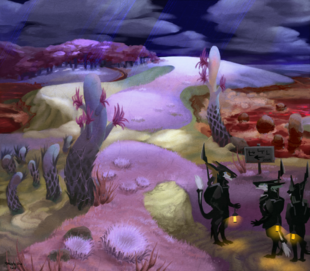 Sergals adorned in armor and equipment to adapt on an alien environment in Talyxian biomes, are exploring on a plain within Thekan region, just a front of a forest. On aside the hill, there is a red river called Blood River, a Talyxian water place.

Thekan(セケン Seken) is a Talyxian biome area which forms plain and forest, located on the Northeast lands on Planet Tal.

There are various kinds of wildlife in this area, ranging from small-sized and defenseless animals all the way up to middle or large-sized, threatening animals such as Talyxian Weasels and Actinias. However, this region is comparatively safe areas on the whole, because almost all areas within Thekan are composed of plain zones, having a low mutability ratio and few threatening creatures.

A part of the area in this region features "Blood River" which is Talyxian river, looks like a river composed of blood as the name suggest. It appears visibly during the wet season, however, during the dry season, it will be like the stain in the long hollow due to getting dried up completely.

Checking Stations on the Road from Reono 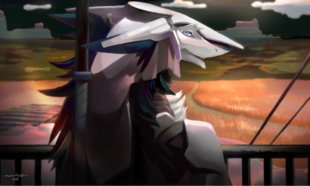 Somewhere within the Northeast land on Planet Tal, towards the later stages of the Rain Calendar. There is a Sergal adorned in Shigu armor, standing atop the balcony of a building. As their face reveals Eastern lineage features, one can assume that they have Eastern origins, while belonging to Shigu, the same as with Kadd’s case. This is a place nestled between plain and wetland within the Thekan area, located at the foot of the Northern Lyvank Mountains.

Many buildings like which the artwork shows are erected at intervals spanning across the long road which leads from Reono towards Shigu, in order to work as a guard post as well as a fort to monitor goods, conveyancers, refugees, traders and so on.

In the later stages of the Rain Calendar, in addition to their original functions, these buildings would start to serve the same purpose as that of those on the Salt Road heading towards Gold Ring from Reono do; inspection of goods which have the potentiality of biological threats, sneaking parasites, and observation of Talyxian biomes.

There is a grassy plain area stretching outwards from the building which the artwork shows, with orange grasslands which can be seen, a very common plain in the surrounding Reono region. These grassy plains still have the risk of obscuring view to the feet, however, they are comparatively safe areas, as having a low mutability ratio and few threatening creatures. Generally, the grassy plains areas in Talyxian biomes are considered to be safer than forest areas.

Beyond the grassy plain which the artwork shows, there is a Talyxian lake or swamp which is composed of mucilaginous water. This water area may disappear by virtue of drying up, depending on the season. Within these mucilaginous water areas, various kinds of Talyxian creatures such as planktons and small aquatic animals live. They range from comparatively big ones to smaller sized ones.

With regard to the relationship with people, native Northern folk are familiar with them and have been making use of these water areas for a long time. However, people who come from other regions often avoid or do not prefer to use them as there are many unidentified microorganisms within the water source, such as river and swamp in Northern lands. Of course, salt lakes are exempt from this situation. Because of their saline content, it ensures fine hygiene while keeping at bay any potential threatening Talyxian microorganisms.

In the later stages of the Rain Calendar, Northern lands would benefit from organized, clean water sources, such as dug wells and water drawn from the Lyvank mountains.