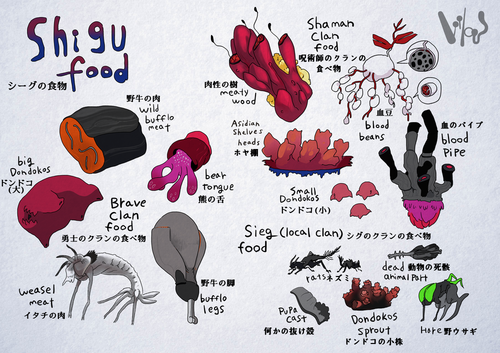 There is a variety of foods eaten by the Northern tribes, but most of these are common meals to Northern Eltus before modernized technology and cooking methods were developed. The majority of Eltus in the North are Sergals, so most of the foods listed below are the type of meal that is easily swallowed in raw states, requiring no cooking.

A prime reason for this is because Sergals were primarily nomadic, always on the move. Talyxian food was easier to eat, but sadly wasn’t very flavorful.

A warrior-focused clan, centered on the mighty Associator-wolf with wolf bones. They enjoy dressing up like their heroine Rain, proudly wearing her red markings painted on their faces or bodies in the thrill of the hunt. They chase the huge beasts in the wilderness, bravely fighting in groups and proudly knocking down those beasts. Their prey is often a chosen large beast that will provide a challenging fight. They have a deep respect for the forest, which they do not desecrate, for it is the domain of the wolves. These are the type of foods they enjoy eating:

A wild cow creature that inhabits the flat areas away from the forest, namely the Astna Plain and Sailzane regions. It is generally a calm animal, but its territorial instincts are strong, warily guarding against and attacking any who approach. The meat of the buffalo is delicious; because of this, there are groups of domesticated cattle to allow easier access to game meat.

A beast inhabiting forest areas from north to east. They are extremely ferocious and zealously protect their children. The mighty warriors of the warbands rush at them without hesitation, cutting and downing them one after another.

A formidable beast that inhabits the wilderness, forests, and plains throughout Tal, these are fully grown dondokos. They are especially large animals, who sometimes gather into huge swarms across the forest and wilderness, proving quite dangerous. To catch these beasts a Brave must approach quietly, no vibrations, and throw a spear aiming at their back. The impaled dondoko will make louder noises with their footsteps, drawing the attention of the swarm. They will be injured by other dondokos due to their cannibalistic nature, making it easy to single out and capture later on.

A creature that generally breeds in the forest, the weasel is regarded as a pest. Because of a large number of predators found in the forest, weasels often venture into the plains and wilderness, creating an annoyance to any who come across it. They are famous for being bothersome, though they are regarded as a common game for Brave Tribes.

While not pictured here, actinias are ferocious beasts with delicious meat organs. It is regarded as one of the most powerful creatures of the forest, making the challenge of besting one in battle quite the bragging right. Its meat is poisonous, so the poison must be extracted before the meat is safely edible.

It is a clan with a stamp that is a proof of practice, centering on a magician who manipulates names. Using their biological knowledge and their “naming” technique, they can explain the true nature of things without giving in to the miasma’s influence. They are excellent in handling danger, entering without fear into a resource-rich forest, and harvesting the meat plants with ease. They live mainly on bringing back seeds, hunting small animals, and domesticating others. This provides a wide variety of food selection.

A common flesh tree that grows in the forest areas of Tal. Although many trees near the entrance of the forest are hard-skinned, making them hard to eat, the deep forest trees have softer wood and plenty of nourishment available to eat just by cutting chunks out of them. They are the “forest’s viscera and sinew”. Although they are considered staple foods, harvesting these woods requires journeying deep into the dangerous forest.

A type of vegetation found in Tal. Although it is called a bean, it grows in the ground of the forest to nearly the size of a potato. Wild species grow in large clusters, but because wild blood beans are dangerous to harvest, many are brought home and grown in round gardens for easier collection. Blood beans have a taste similar to that of internal organs. In addition, several blood bean varieties have been cultivated in Gold Ring.

A small dondoko. In addition to capturing them wild with a hidden trap, it is also possible to catch groups of infant dondokos in their bulb state and raise them as livestock for easier harvesting. This lead to husbandry methods to raise Dondokos. Pigs and cattle are also kept as livestock in this way.

A body part from Ascidian shelves. This creature is often used for shelving, desktops and other uses after separating the lower half from the rest, applying salt and other treatments. This is an important export for Reono but people in the north use the upper half as a soft food. Since it is slightly hard, Sergals cut it and swallow the pieces whole. With their fondness for chewing food, Agudners tend to pickle these for later eating.

Found in the wilderness and shallow forests, this is a pipe-like organism that forms a fungal bed-like colony. Although not very nutritious, it is easy to grab and cut and then eaten by swallowing or chewing.

Although not shown on the chart, it is a large toad-shaped Talyxian living mainly in the main Magoe Forest. The toads of Magoe will grow considerably larger than others found elsewhere. The toad is basically a trap-like creature that does not venture out of the forest and any attempts to capture without using a shaman are almost always unsuccessful.

Not to be confused with Shigu Clan, the word "Sieg" means "Sergal (or we/us/our)" in Northern primitive language."Sieg" is the original word. That is a different language speech entirely separate from Shigu. (Shigu and Sergal is GR official language). Local clans that do not have a leader or a name are considered “Sieg.”

It is basically a gathering of weak, cowardly people who have no way to fight against the wildlife and the forest. They survive by eating twigs, bugs and small animals that run around in the wilderness off the forest.

A common small animal throughout Tal, they live in holes that they drill at the roots of plants; they have a rough texture and are not very tasty. Generally, civilized people don’t eat them, but they are still made into preserved food in Gold Ring since they are easy to catch.

Leftover parts of deceased animals, such as bones, meat scraps, and skin. They are often found scattered on the outskirts of the forest. These are one option for poor people to use as food if they can’t go into the forest because they are too weak to fight or have no other way to obtain food.

A shed skin castoff by a Talyxian creature. A number of Talyxians undergo metamorphosis and ecdysis, shedding a skin as they grow into further developed stages of life. The chaff from these pupae hold some nutritional value, and large pupas may actually be used as a material for clothing.

When a Dondoko has their legs eaten by other dondokos, the remaining body mass fades to a black color and it forms a sort of bulb. This becomes a source of many babies. Shamans have found a way to raise dondokos from bulb state to livestock age. However, less knowledgeable people usually pick the bulb directly and eat it. While it does taste good, the size is often too small to last long.

A hare similar to those found on Earth. They are domesticated and treated as common livestock for most of Tal, but they are one of the favored/preferred higher food for this Sieg group of people. They are very nimble, so while they are easy to kill, the time and effort to catch them is often great. There is also the risk that such a chase may bring the hunter across the undesired path of a dangerous creature.