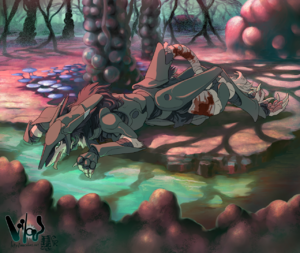 Artwork for A Braveyard, the novella - Bergt the Northern Sergal, brought to their knees in what appears to be either, a sensation of terror, as if frightened of what the forest is showing them or they have encountered within, or awe and amazement at something newly discovered, or never before seen, or simply. Exhaustion, tired after a long expedition or simply arriving at their limit and falling to their knees due to fatigue, all at the sight of what appears to be a grove entrance of some sort, within the Talyxian Biome forest, Magoe, known as the off-limits forest.

Gases produced by plants indigenous to Magoe produce hallucinations. Because of this, Eltus people require oxygen cylinders and "perception filters" to get across Magoe. Due to the extreme danger of Talyxian forests to Eltus races, most of the area is unexplored wilderness, home to the myriad primitive Talyxian organisms, including many undiscovered or undocumented species.